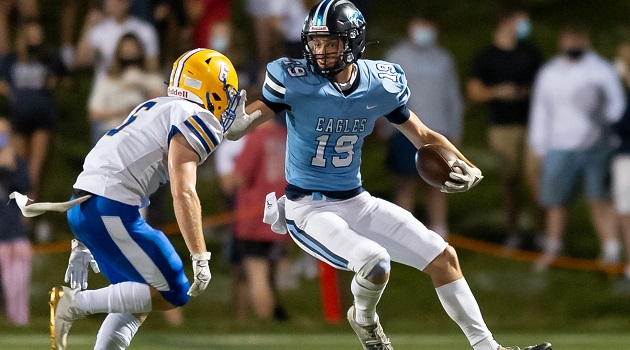 Chapin varsity football wrapped-up its region schedule at 2-2 with last week’s 35-21 win against Lexington and now plays host to District Five rival Irmo this week in the first of two non-region rival games to complete the regular season.

The Eagles (3-2 overall) will take on the Yellow Jackets (4-1, 3-1) at 7:30 pm Friday at Cecil Woolbright Field, and then travel to Mid-Carolina next week to complete the season against the long-time arch-rival Rebels in the Battle of the Bell.
Unlike Chapin, Irmo will play one final region game next week against Westwood to wrap-up its regular season, and, after this week’s home game versus Newberry, Mid-Carolina will finish against Chapin next week in games scheduled before the playoffs begin on November 13.

Back in Region 5-5A, while Dutch Fork has locked-in the region title at 4-0, Chapin is in a race with River Bluff for second in the conference and a berth in the playoffs. The Gators (2-1, 2-1) postponed some games earlier because of virus concerns and still have a non-region game (this week) and a region game November 6 to complete their season.

If River Bluff beats Lexington (currently 0-3, 0-2) on November 6, the Gators would improve to 3-1 in the region, ahead of Chapin.

If Lexington wins against White Knoll (0-5, 0-3) this week and River Bluff next week, that would create a 2-2, three-way log jam in the standings between Chapin, River Bluff and Lexington.

It should all be clear and official after the November 6 games are completed.

State Finals
And while the varsity football playoffs are still yet to come, other fall teams have just recently completed their seasons.

Chapin’s girls golf team qualified for the state finals at the recent qualifying round, and that team was competing early this week in the finals at The County Club of Lexington. Eagle golfers Emily Baker, Mia Andrade, Lilly Reed Black, Sadie Licata and Reagan Haggard played the first round Monday with the second round set for Tuesday.

The Eagles girls tennis team qualified for the playoffs and took a 4-1 loss in the first round against Ashley Ridge on October 20, while the region’s first place team, River Bluff, advanced to the second round but was then eliminated by Wando.

And it is also close to time for the Cross Country State Finals. The Class 5A qualifying round is Saturday at the Sandhills Research Center, and the state finals are set for next weekend.

No spectators will be allowed at the qualifier rounds, according to the South Carolina High School League.