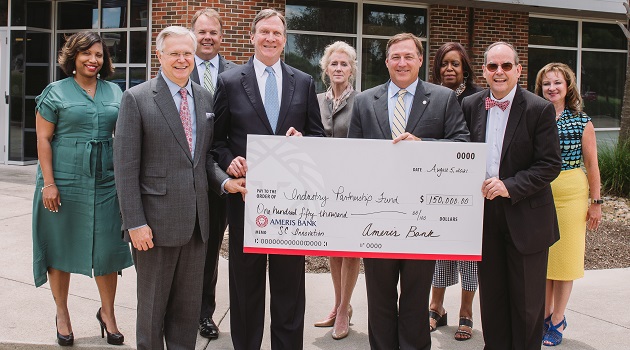 Ameris Bank announced a $150,000 donation to the South Carolina Research Authority’s Industry Partnership Fund to help fuel innovation throughout the Palmetto State. The donation is the largest gifted by a bank in the 38-year history of the SCRA.

The SCRA is a public, non-profit corporation that supports South Carolina’s innovation economy. Chartered in 1983, the organization works closely with academic institutions, entrepreneurs and industry partners to focus on three key areas: advanced manufacturing and materials, information technology and life sciences. The SCRA reported a $952.4 million innovational economic impact on the state in the 2020 fiscal year, and supported 5,251 South Carolina-based jobs.

“We are firmly committed to the sustainability, well-being and growth of businesses in South Carolina,” says Richard Sturm, Ameris Bank regional president for South Carolina. “That begins with being a leader in innovation and technology, and we fully support the SCRA’s mission to continue to bring jobs and industry to our state.”

The Industry Partner Fund (IPF) was established by the SCRA in 2006 to help sustain and grow the technology-based economy. The goal is to enable university research commercialization efforts by accelerating technology-enabled growth in research, academia, entrepreneurship and industry. Last year, IPF contributions funded more than $5 million in technology-related grants and investments.

Ameris Bank operates nine full-service banking locations across the state, covering the Midlands, Greenville, Charleston and Beaufort areas. Ameris’s commercial banking division offers loans to support local businesses including acquisition, expansion, equipment and inventory loans, in addition to a comprehensive treasury and cash management services platform. Since expanding into the state in 2006, Ameris has originated more than $1.5 billion in commercial loans to more than 2,200 businesses in South Carolina.