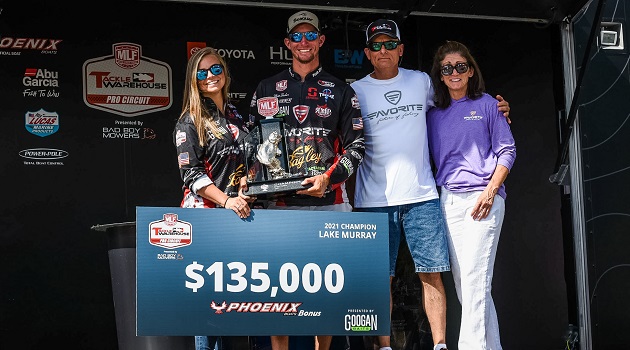 “This has been years and years in the making,” said an emotional Becker on stage after being crowned champion. “I was really beginning to think that I couldn’t win. I’ve always been consistent, near the top of the standings. But I was really starting to doubt that I could win. Just to make a top 10 against this group of hammers is unbelievable. They always say when it’s your time, it’s your time. And man, did I live that this week.”

The 2018 Tackle Warehouse Pro Circuit Rookie of the Year started Day 1 of the event with a plan to target docks and sight-fish spawning bass. But, before doing that, Becker slotted in a little time to try a risky timing/herring-spawn pattern, and he ended up never changing. He kept hitting, and re-hitting, as many points as possible knowing that eventually, the schools of bass would move shallow to feed.

“The spot I caught them Day 2, I had fished three times before I caught them,” said Becker. “I knew the fish were there, but I rotated through multiple times and never had a bite. Then I came back and they were there and they were eating. I went from zero to 14 pounds in minutes.”

Becker said his key baits throughout the week were a couple of different soft-plastic jerkbaits, with the Googan Baits Dart (Green Gizzard Shad) being his best option. He rigged the Dart on rigged on aTroKar TK 180 hook with a TroKar TK 300 treble hook as a stinger. He threw that on a 7-foot, 5-inch medium-heavy Favorite Fishing Hex rod, Favorite Fishing Soleus XCS reel and 15-pound-test Seaguar InvizX fluorocarbon line.

“All week, the little things just always lined up,” Becker said. “Today, I pulled into a cove and I got this overwhelming feeling I was going to go to the first point and catch a 3 ½-pounder, and then I’d go to the second point and catch another 3 ½-pounder. And that’s exactly what happened. That pretty much got me the win.”

Full results for the entire field can be found at MajorLeagueFishing.com.

The MLF Tackle Warehouse Pro Circuit presented by Bad Boy Mowers, Googan Baits Stop 3 Presented by Favorite Fishing – Lake Murray air on a two-hour action-packed television show that premieres on the Outdoor Channel on Sunday, July 25 from 7 to 9 a.m. ET and re-air on the Sportsman Channel this fall.

The MLF Tackle Warehouse Pro Circuit presented by Bad Boy Mowers, Googan Baits Stop 3 Presented by Favorite Fishing – Lake Murray was hosted by the Capital City Lake Murray Country Regional Tourism Board. The next event for Pro Circuit anglers will be the Grundéns Stop 4 Lake Eufaula in Eufaula, Alabama, May 13-16, 2021.

In Tackle Warehouse Pro Circuit competition, the full field of 161 anglers competed in the two-day opening round on Thursday and Friday. The field was cut to 50 anglers on Saturday. Only the top 10 pros based on their three-day cumulative weight advanced to Sunday where the winner was determined by the heaviest accumulated weight from all four days of competition.

Throughout the season, anglers are also vying for valuable points in hopes of qualifying for the 2021 Tackle Warehouse Pro Circuit TITLE presented by Mercury, the Pro Circuit Championship, where they will compete for up to $235,000. The 2021 TITLE will be on the Mississippi River in La Crosse, Wisconsin on Aug. 17-22, and is hosted by Explore La Crosse.