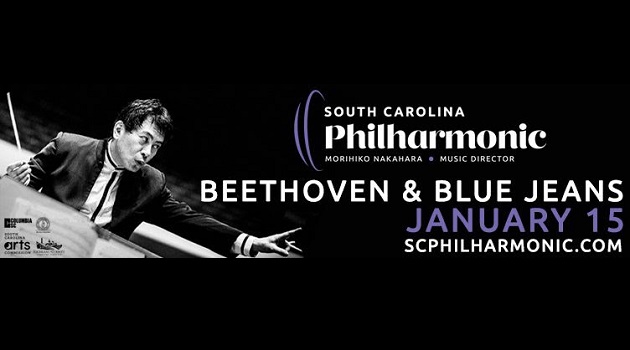 Beethoven & Blue Jeans is back at the Koger Center

The South Carolina Philharmonic presents Beethoven & Blue Jeans on January 15, 2022, at 7:30 PM at the Koger Center for the Arts. This annual event is often the highest-attended concert for the orchestra each season, and this year’s installment features a blockbuster lineup of Beethoven’s Symphony No. 7 in A Major, Barber’s Violin Concerto, op. 14 and Carlos Simon’s contemporary composition Fate Now Conquers. The Barber will feature critically-acclaimed and internationally-known guest soloist Rachel Lee Priday on violin. All concerts this season are presented in person and live-streamed.

Barber’s Violin Concerto and Beethoven’s Symphony No. 7 were originally slated to be performed in January of 2021, but due to the orchestra’s need to pivot programming due to the pandemic, these pieces were postponed and programmed for this season’s Beethoven & Blue Jeans. Music Director Morihiko Nakahara was drawn to the exuberance and excitement of the Beethoven symphony paired with the lyricism and melancholy of the first two movements of the Barber concerto.

Guest violinist Rachel Lee Priday will be performing the Barber concerto with the SC Phil. As an artist who has toured internationally, she has been profiled in The New Yorker, The Strad, Los Angeles Times and Family Circle. Priday previously performed the Barber concerto with the SC Phil during the organization’s music director search which began in 2007. When Nakahara met Priday in Maine last season, he was enthusiastic to bring her back to Columbia for this season’s Beethoven & Blue Jeans.

The concert will open with Carlos Simon’s Fate Now Conquers. Commissioned by the Philadelphia Orchestra in 2020, Simon composed this piece as a direct response to Beethoven’s Symphony No. 7, utilizing Beethoven’s harmonic gestures in the 2nd movement of the symphony. The title, a quotation from Iliad, was found in one of Beethoven’s journal entries. “Simon’s piece is brief – around 5 minutes,” said Nakahara, “yet it packs so much power and drama. It is going to provide a perfect opener for this program.”

The SC Philharmonic is excited to offer $10 Student Rush tickets for all Masterworks Series concerts this season! Student Rush tickets may be purchased 30 minutes prior to the concert with a valid student ID at the circular ticket kiosk in the Koger Center lobby. Secure great seats at an affordable price for a wonderful night of music!