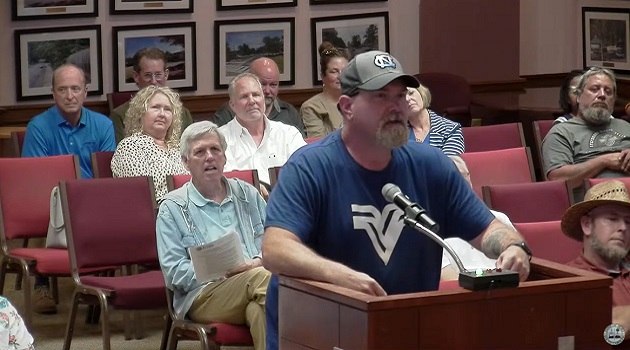 A crowd of Irmo citizens and residents from neighboring communities sounded off at Tuesday’s town council meeting against a zoning change they say would wreak havoc on their neighborhoods.

“It will open up a Pandora’s box,” said Greg Zimmerman. People are going to hate it.”

“Keep the neighborhood as it is now,” said Chuck Wilcox.

The area does not have the infrastructure to support more development in the residential area, a resident of the Wynhurst area said. It would pose major safety problems.

“We can’t even get out of our neighborhood,” one resident said.

The council will face a backlash if the change is approved, another resident said.

“You will have a fight on your hands.”

The outcry came as the council considered a zoning change from Finge Agricultural to General Commercial at a 9-acre site near the intersection of Farming Creek Road and Dreher Shoals Road. The site could then be developed for commercial use as a “storage” site, where storage bins would be made available to residents of the area. The site would have some retail development.

The planning commission recommended approval of the change, but council members appeared to be swayed by the complaints. The zoning change was voted down by a 4 to 1 vote.

Only Mayor Barry Walker Sr. voted in favor of the change.

Walker pointed out that Irmo does not impose millage on residents, thanks to the income received from business licenses in the town. To continue in that mode the town needs to keep bringing more businesses into the town.

Councilman Bill Danielson said zoning change to too great for the residential area.

“We need some kind of buffer,” he said.

As developers will keep coming to the Irmo area with new plans the town has to come up with a plan for the future.

“We need a solid vision,” he said.

The contractor for the site, Brannon Graybill, said he hasn’t given up on the project.

He said he could make changes that could make the site more acceptable and bring it back to the council.

In other action the council gave first reading approval for an operating budget of $8,306,294 for the 2022-2023 Fiscal Year. The council has already had work sessions to discuss the budget. The new budget does not impose any tax increases.

The council approved a bid of $124,768 with Grace Construction Co. for grounds work at the Irmo Town Park. The council also approved a $5,500 contract with Munnerlyn Pyrotechnics for the town’s July 4 fireworks show.