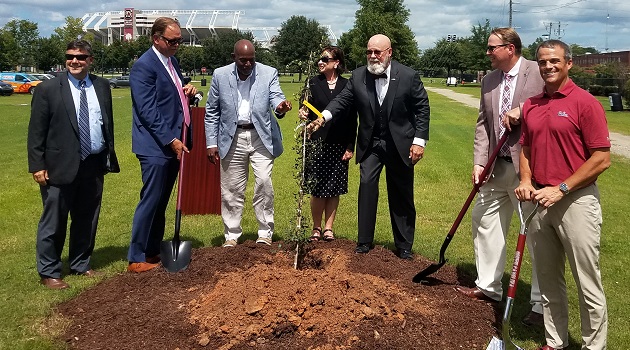 “This tree represents USC’s eight national championships generated by four of our top athletics programs since 2002,” said Mullikin, whose MULLIKIN LAW FIRM is the presenting sponsor for the USC vs Georgia State football game, Sept. 3. “Each of the national championship programs have elevated USC’s status among all NCAA pro-grams nationwide. When one team becomes a national championship team, all teams share in that glory and are natural spotlight beneficiaries of those championship laurels.”

In addition to Beamer, Mullikin, and Few, among those in attendance were Dr. David Cárdenas, dean of USC’s College of Hospitality, Retail and Sport Management; Dr. Julius Fridriksson, USC’s Office of the Vice President for Research; and Ben Duncan, S.C.’s first chief resilience officer; among others.

“The tree we planted is a statement and will serve for decades as a living reminder of the excellence we find within all of our Gamecock athletics and academics,” says Mullikin, a world-renowned global expedition leader, retired two-star military commander, and USC professor.” “This excellence we speak of in the 20th year of the first of our national championships has existed since the university’s founding as South Carolina College in 1801.”

The tree was planted in front of the entrance to the Jerri and Steve Spurrier Indoor Practice Facility, 20 National Guard Road, less than a mile from Williams-Brice Stadium.