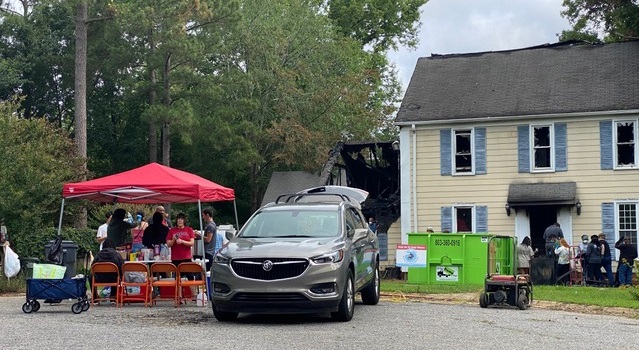 At 1:15 on the afternoon of June 10, Irmo Outreach Committee volunteer Allen Olson heard an unusual noise while sitting on the back porch with his dogs at 107 Maid Stone Court, in Irmo’s New Friarsgate subdivision.

Turning around, Allen saw smoke coming from beneath the eves of his home. Opening the door, he found the house fully engulfed in fire. The fire is believed to have been caused by smoldering wires in the kitchen wall, apparently ignited by an earlier power surge.

Irmo Outreach President and Founder Wade de Loach issued a request on Facebook on behalf of the Olson family, explaining that Allen has done much for the Irmo community, single-handedly building wheelchair ramps and performing repairs for several income-challenged residents in their own time of need. While several Irmo Outreach members were present to aid when Allen asked if others might help to collect family photos and other cherished items from the burned remains of his home, the adults were extremely impressed by the efforts of dozens of young people, most of them from the Lexington/Richland School District 5 Beta Clubs.

Others who participated were staff members from Dutch Fork High School, school athletes, and members of the school’s JROTC unit.

The Olson’s youngest son, 16-year-old Parker, had recently been inducted as a member of the Spring Hills Beta Club chapter. While an official headcount wasn’t conducted, at least three dozen current and former students (some of them having graduated four years ago) donned respirators and gloves to assist with the clean-up and recovery process. Members of the Irmo Fire Department were also on hand helping with the removal of items and lending expertise regarding safety protocols.

While insurance representatives have declared the Olson home a total loss, Allen says he’s extremely grateful for the few items, though mostly damaged by smoke and water, that the volunteers were able to remove from the residence. Among these was the Olson family Bible, which, aside from obvious heat damage to the back cover, was otherwise unharmed, and a few family photos printed on both paper and canvas. Sadly, the family cat lost its life in the fire, but no one else was injured. The Olson’s are currently residing at another home in the Challedon area, but look forward to moving back into the house on Maid Stone Court when the reconstruction process is completed.

Students from the Beta Club and a few private citizens presented the Olson Family with cash; Allen says he and his family are grateful, but that his insurance company will be covering the entire loss, and that he and his family do not desire a GoFundMe or similar financial account be established on their behalf. In a characteristic fashion, Allen asks that interested community members offer help to others in the Irmo community, as he does by volunteering or supporting the Irmo Outreach Committee in his name. For more information, visit irmooutreach.org/volunteer.