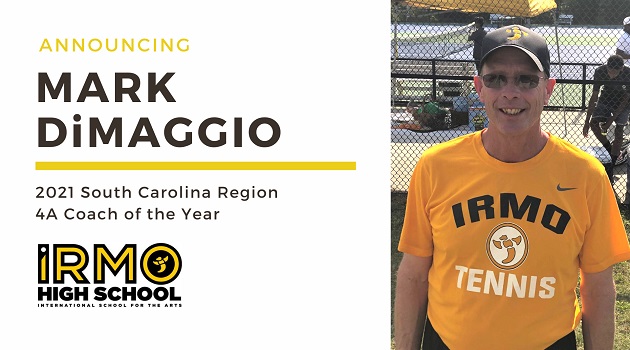 Irmo High School tennis coach Mark DiMaggio has been named the 2021 South Carolina Region 4A Coach of the Year.

“It’s nice to be recognized by my peers not only for the tennis success of our players but for the players’ attitude, camaraderie and sportsmanship,” DiMaggio said of the award by his peers. “The success of this team is attributable to the time, effort and dedication of the players and coaches and the support of our parents. Most of the players in the starting lineup have been with me and my assistant coach Stan Seabrook since they were in middle school and they’ve earned the success that they are having this year.”

DiMaggio has been coaching both the boys and girls tennis teams at Irmo High School for five years. This year, the boys team finished in the region standings with a 6-2 record. The team’s overall season record was 10 wins and 3 losses. The team qualified for the State Championship playoffs which start May 4. The 4A region includes A.C. Flora High, Dreher High, Irmo High, Lugoff-Elgin High, Richland Northeast High, and Westwood High.

“Coach DiMaggio does an excellent job in all facets of our tennis program,” said Irmo High School Athletic Director Ray Canady. “His best asset is his ability to mentor and mold his players into young men and women who are well prepared for life after high school. He is well liked and respected by his players and their parents and is a great representative of Irmo High School and School District Five.”