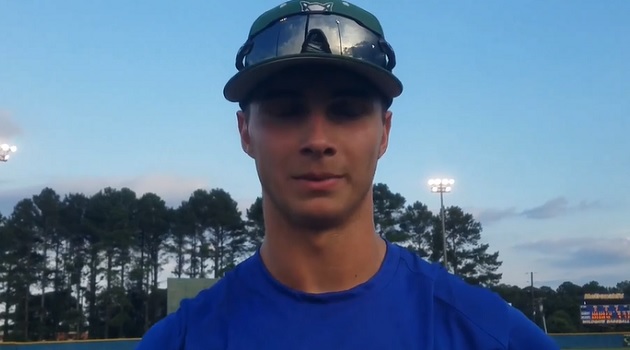 The award, which recognizes not only outstanding athletic excellence, but also high standards of academic achievement and exemplary character demonstrated on and off the field, distinguishes Taylor as South Carolina’s best high school baseball player. Taylor is now a finalist for the prestigious Gatorade National Baseball Player of the Year award which will be announced in July.

The 6-foot, 170-pound senior center fielder posted a .450 batting average with seven home runs, 34 runs scored and 33 RBI this past season, leading the Silver Foxes to an 18-6 record and a berth in the Class 5A district final. The nation’s No. 12 draft prospect as ranked by Baseball America, Taylor also stole 21 bases and walked 25 five times to compile an on-base percentage of .586 and an OPS of 1.455.

A member of his school’s Key Club, Taylor has volunteered locally at a foster care facility and a food bank in addition to donating his time as a youth wrestling coach.

“Will Taylor embodies everything it is to be a student-athlete from Dutch Fork,” said Dutch Fork High head coach Casey Waites. “He is humble, makes those around him better and continues to excel in all that he does. Dutch Fork High School, Dutch Fork football and Dutch Fork baseball have been blessed to be a part of his academic and athletic journey.”

Taylor has maintained a 3.49 GPA in the classroom. He has signed a National Letter of Intent to play baseball on scholarship at Clemson University this fall, but is projected as an early round selection in July’s Major League Baseball draft.

Through Gatorade’s cause marketing platform “Play it Forward,” Taylor has the opportunity to award a $1,000 grant to a local or national youth sports organization of their choosing. Taylor is also eligible to submit a 30-second video explaining why the organization he chose is deserving of one of twelve $10,000 spotlight grants, which will be announced throughout the year. To date, Gatorade Player of the Year winners’ grants have totaled more than $2.7 million across 1,117 organizations.

Since the program’s inception in 1985, Gatorade Player of the Year award recipients have won hundreds of professional and college championships, and many have also turned into pillars in their communities, becoming coaches, business owners and educators.
To learn more about the Gatorade Player of the Year program, check out past winners or to nominate student-athletes, visit playeroftheyear.gatorade.com, on Facebook at facebook.com/GatoradePOY or follow on Twitter at twitter.com/Gatorade.