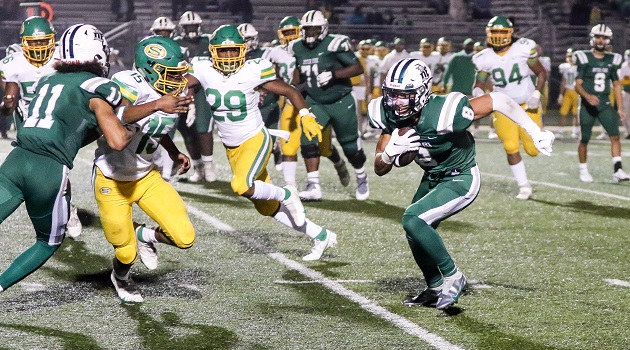 After winning their first round games last week, both Dutch Fork and Irmo advanced to this week’s second round of the 2020 varsity football playoffs — and they both will be playing on their home fields.

Irmo’s Yellow Jackets (6-2) went out on the road last week to beat Westside 43-35 and advance to the second round on Friday against Catawba Ridge (6-1) at Irmo’s W. C. Hawkins Stadium, according to the South Carolina High School League (SCHSL).

The Copperheads defeated Greer in the first round to earn their trip to Irmo this week for the second round game. Like Irmo, Catawba Ridge finished second in its region and defeated a region champion to advance to this week’s Round Two.

The winner of Friday’s game will advance to the Class 4A upper state semifinal round next week against the winner of the South Pointe versus A. C. Flora second round game.

Flora’s Falcons (7-0) finished No. 1 in Region 4-4A, just ahead of Irmo, and they beat Traveler’s Rest 41-0 last week to advance to the second round. If both Irmo and A. C. Flora win this week, that would set up an upper state semifinal round between two region opponents, the Yellow Jackets and Falcons.

But, again, the most important game now is the next one.

The defending 5A champion Silver Foxes defeated Summerville 42-7 last week in their march toward a fifth run for another state championship.

After a scoreless first quarter, Dutch Fork (7-0) took a 14-7 lead in the second to go into halftime up by a touchdown (TD). Then the Foxes scored 14 points in the third and in the fourth periods, while holding the Greewave (4-4) to zero to secure the win.

Dutch Fork now will play host to Carolina Forest (7-1) at 7:30 pm in Friday’s second round. The Panthers beat Goose Creek 35-28 last week to advance, and they have lost only to Sumter (7-0) thus far in the season.

Dutch Fork’s Region 5-5A opponent, River Bluff, beat Fort Dorchester on the road last week to advance to this week’s second round at Sumter. If the Silver Foxes and the Gators both win their matchups this week, the Class 5A lower state semifinal round will feature Dutch Fork and River Bluff at Silver Fox Stadium next week.

But the outcomes of this week’s games are yet to be determined, and that is the focus right now.