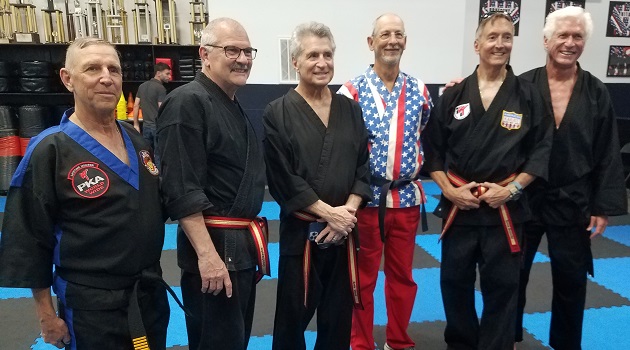 Hall of Famers honor martial artists from around the U.S.

“The Gathering is a wonderful bonding experience reconnecting with lifelong friends going back to my college days for me personally,” says Keith Vitali, a world-renowned Karate champion, Hollywood star (numerous martial arts movies), and recent inductee into the World Martial Arts Grand Masters Hall of Fame.

Bruce Brutschy, who like Vitali is a SCBBHOF inductee, agrees.

“This year’s event, like previous gatherings, gave us all the opportunity to share memories and to see how the sport of karate and all the workouts over the years have in various shaped our lives,” says Brutschy. “As instructors, it was also nice to see how well our students have turned out.”

Brutschy adds: “This would not have taken place without Mike Genova who always works tirelessly to make events like this happen.”

Genova, the founding senior instructor at Genova Family Karate, is an inductee in – and the current president of – the SCBBHOF.

“This event has achieved and achieves a number of significant things not the least of which is what we read in Proverbs 27:17,” says Genova. “‘As iron sharpens iron, so one man sharpens another,’ and us being around one another – great martial artists, great personalities, great friends – instead of us being competitors we are all sharpening and refining one another.”

According to Genova, for him and others, karate is no longer simply about fighting and winning tournaments. “I always thought it was about karate, he says. “Today I know it is about Christ. It’s about serving others.”

Among the five who graduated to 8th degree were Blane R. Russell, who began training under Keith Vitali in 1972; Billee Purvis, owner-operator of Life Force Karate School; Ronnie McGirt, the current sergeant at arms for the S.C. Senate; and Bruce M. Hancock, training coordinator and instructor at the S.C. Criminal Justice Academy.

The S.C. High Dan Board is composed of Keith Vitali, Brutschy, and Genova; all 10th-degree black belts who received their rank by a group of international grandmasters who convened in Dallas, Texas in 2019.

Since its inception in the 1980’s (officially founded in 2012), the S.C. Black Belt Hall of Fame has become one of the most-respected martial arts halls of fame in the nation. Among its inductees are Keith and Steve Vitali, Genova, Brutschy, Thomas, and “world renowned explorer” Dr. Tom Mullikin; also “karate greats” like Sam Chapman, Bobby Tucker, Marty Knight, and Tommy Genova, among others.

EDITOR’S NOTE: W. Thomas Smith Jr., the author of this article, was awarded an honorary black belt by the S.C. High Dan (degree) Board, May 14, 2022. He is one of only two recipients to have ever been honored as such by the state’s High Dan Board. “We took a great deal of pleasure honoring Tom for his service to the country and the state,” says Brutschy. “He continues to stand on a wall that makes us all safer. Much respect.” The first recipient was Richland County Sheriff Leon Lott – the 2021 National Sheriff of the Year – who received his honorary black belt in 2012.