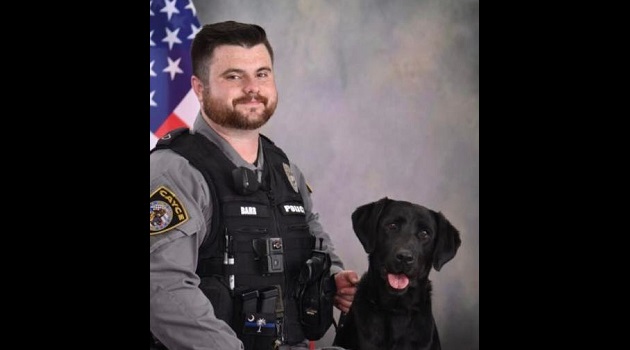 Barr was at the scene shortly after the first officer arrived around 2:48 am. Two other officers showed up at the scene, also. A woman inside the home had called 911 about her husband. A man standing in the front yard turned out to be a family friend and after confronting the man a shot rang out from inside the home striking Officer Barr.

“There was no reason for it (the shooting), It was inexcusable,” Cayce Chief of Police Chris Cowan said.

Officer Barr did not recover from his injuries.

The suspect, identified as 36-year-old Austin Henderson of Cayce, shot Barr from an elevated position killing him at the scene.

As officers assisted Barr another shot was fired by Henderson but did not injure anyone.

He barricaded himself and held his wife and three-year-old child hostage during the stand-off. Columbia Police Department negotiators were in contact with Henderson for 7 hours before he took his own life with a firearm.

Law enforcement shut down the surrounding area during the incident and other agencies responded to assist the Cayce Police. SLED and Lexington County Sheriff’s Department helped secure the scene. No other injuries to civilians or law enforcement were reported

Officer Drew Barr went to work for Cayce Police in 2019 as a safety officer and joined the K-9 unit in 2020. His canine officer was named Molly. Barr was an EMT for 3 years starting in 2013 and was a captain for the Monetta Volunteer Fire Department. He was 27 years old.