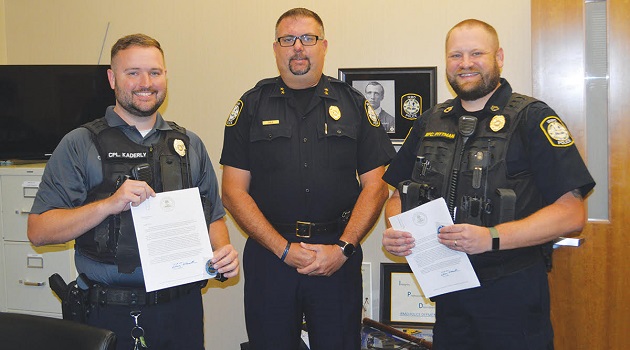 Numerous officers of the Irmo Police Department were recently recognized by Governor Henry McMaster for saving a life by administering the overdose-reversal drug naloxone (narcan).  Sergeant First Class Pittman, Sergeant Aivazis, and Corporal Kaderly responded to separate incidents during the year 2020 and used their training to determine that someone at the scene was in need of narcan.  Chief Bobby Dale stated, “no matter the circumstances, when officers are serving our community, our number one goal is to save lives; and that’s what these officers did here.”

The officers were each presented with a Law Enforcement Officers Naloxone “LEON” Program challenge coin on Thursday, September 30th, 2021 by Chief Dale during a recognition ceremony.

The opioid epidemic is a confirmed public health emergency in South Carolina, with overdose rates continuing to rise significantly each year.  In 2019, there were more than 1,100 drug overdose deaths, and more than 75 percent of those deaths involved opioids.  Preliminary data show that these numbers further increased in 2020.

Sergeant Paul Pittman, Sergeant Alexander Aivazis and Corporal Christopher Kaderly were trained in the administration of naloxone through the Law Enforcement Officers Naloxone (LEON) program, a statewide effort that makes naloxone available to officers throughout the state and trains them in how to recognize an overdose and administer naloxone to assist individuals until EMS arrives.  As of this year, training has occurred for 11,448 officers at 262 law enforcement agencies, and almost 2,400 overdoses have been reversed by officers trained through the LEON program who have administered naloxone in an emergency situation.