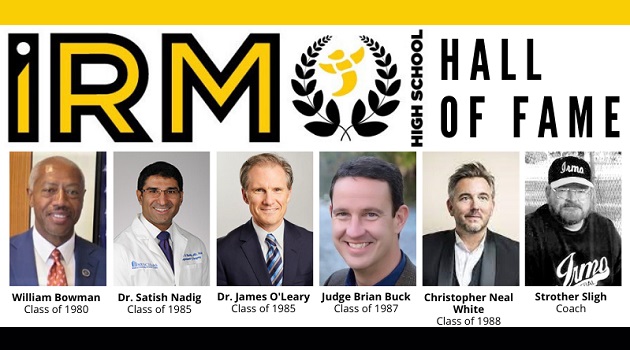 Irmo High School’s 2021 Hall of Fame ceremony will take place virtually this year and more information will be announced soon.

“Irmo High School continues its legacy of celebrating our Proud Past, Bright Future with the 2021 Hall of Fame recognition,” said Irmo High School International School for the Arts Principal Dr. Robin Hardy. “Each inductee has left his or her indelible mark on our most special community. This year’s inductees exemplify why, together, we are Irmo Strong.”

William Bowman Jr. is a 1980 graduate of Irmo High School with deep ties to the community, dating back to his third-great grandparents who settled in the area in 1803. He attended Irmo Elementary, Irmo Middle and Irmo High. He has served the Irmo and greater South Carolina communities through his work as a State and Federal probation officer, elections official, and volunteer. Bowman worked for the South Carolina Department of Probation, Parole and Pardon Services for 12 years as a probation officer and parole examiner. In 1996, he became a United States Probation Officer in the District of South Carolina (Columbia). There, in addition to his normal duties, Bowman developed programs to help individuals released from Federal institutions to gain knowledge and life skills so that they could move beyond their former circumstances. His programs included a Child Support and Fatherhood Workshop; Starting Your Own Business; Home Ownership; Job Readiness and Job Fair Programs; Women’s Enrichment Seminars; a Dave Ramsey Financial Peace University Seminar; and a clothing closet for newly released offenders. Outside of his professional career, Bowman has worked for 28 years as an Irmo Precinct Poll Manager/Clerk. He has served since 2019 as a Board Member on the Lexington County Elections Commission. He is an active member in the Brookland Baptist Church in West Columbia, where he has volunteered extensively with its Boy Scout troop and youth programs, including life skills workshops and the church’s Young Men’s Oratorical Contest.

Brian Buck graduated from Irmo High School in 1987. He obtained a Bachelor of Science degree from the University of South Carolina in Criminal Justice in 1991. Brian joined the Irmo Police Department in 1991 where he worked for over 27 years serving in many roles and receiving many accolades for his work. In 2005, Buck was named Chief of Police which he held until 2015. During his tenure as chief, Buck continued the police explorer program which he participated in while in high school. The Irmo Police Department was nationally recognized with an Excellence Award by Tyler Technologies for his efforts to modernize the patrol division. Buck and the Irmo Police Department received a commendation from the Royal Metropolitan Police Department in London (New Scotland Yard) for their work in apprehending a fugitive who had fled to Irmo. Chief Buck was recognized as the Public Servant of the Year in 2013 by the Greater Irmo Chamber of Commerce. Judge Brian Buck was appointed to the at Large Magistrate Bench of Lexington County in June of 2015 by Governor Nikki Haley. Buck is still currently employed at this position. Brian Buck gives back to the community in many ways. He was a member of the Board of Directors for the South Carolina Municipal Insurance and Risk Financing Fund and also on the Executive Committee of the Board of Directors of Crimestoppers of the Midlands. Buck is an active member of St. Andrews Presbyterian Church, is currently a member of the Board of Directors for the Lake Murray/Irmo Rotary Club and a volunteer with Keep the Midlands Beautiful and Meals on Wheels. Buck is also a FAA certified commercial pilot volunteering his time to Angel Flight.

Satish Nadig, M.D., Ph.D. is a 1995 graduate of Irmo High School. He is a researcher and transplant surgeon at the Medical University of South Carolina (MUSC). After graduating from Irmo, he earned his undergraduate degree from Washington University and his medical degree from MUSC. He completed a surgical residency at Beth Israel Deaconess Medical Center at Harvard Medical School and a fellowship at the University of Michigan. In between those stops, he earned a Ph.D. at Oxford University in the United Kingdom. He returned to MUSC as faculty in 2013, where he serves as the P.K. Baliga, M.D., Endowed Chair in Solid Organ Transplantation, Associate Professor of Surgery, Pediatrics, and Microbiology/Immunology, and Chief Medical Advisor to Pandorum Technologies.

Dr. James A. O’Leary was graduated from Irmo High School in 1985. He graduated from the University of Notre Dame in 1989 and Vanderbilt University School of Medicine in 1993. Dr. O’Leary returned to Columbia after a residency at Duke University and a fellowship at the University of Pittsburgh. He entered private practice with Midlands Orthopedics and Neurosurgery where he remains today. Dr. O’Leary has served in a variety of leadership roles in healthcare and the community over the past two decades. He served as President of the South Carolina Orthopedic Association in 2013. He then served a six year term as the South Carolina representative to the American Academy of Orthopedic Surgery Board of Councilors. Dr. O’Leary has remained involved in the activities of School District 5 through the education of his children as well as a District 5 Foundation board member from 2014 to 2016.

Strother Sligh was a coach and a teacher of physics and math for Irmo High School. He started in 1971 after graduating from the University of South Carolina with a degree in chemical engineering. He also received his M.A.T. in mathematics. In his 28 years at Irmo, he dedicated himself to students and athletes, becoming a legend. Several alumni are quoted in an article in The State Newspaper. Coach John Bass refers to him as a mentor and father figure, who helped young men become better people. Ray Canady of Irmo High credits Sligh with teaching him to follow his instincts. He states that Sligh had high standards, expectations and a high work ethic. Sligh won 515 baseball games at Irmo and led the Yellow Jackets to six state championship appearances. He was inducted into the South Carolina Coaches Hall of Fame in 2009 and the South Carolina Baseball Coaches Hall of Fame in 2017. Irmo named its baseball field for Sligh after he retired. He passed away in February 2016. His widow Linda Horne Sligh still resides in the Irmo area.

Chris White was graduated from Irmo High School in 1988. He went on to graduate from Furman University with a Bachelor of Arts in Drama and attended the Herbert Bergoff Studios in New York for acting. He now resides in Greenville, SC with his wife, an executive producer, screenwriter and producer, Emily Reach White. He is one of two independent film directors recognized by the SC Film Commission. His most recent film, Electric Jesus, with a star-filled cast, has won numerous awards and nominations around the nation. White won best director for the film at the 2020 Orlando Film Festival where the piece was also awarded best picture. Electric Jesus was named the best narrative feature at, both, the Fayetteville Film Festival and Rome (Georgia) International Film Festival. Additionally, he is known for his award-winning web series, Star Trek Continues. Chris White has always been willing to visit his roots at Irmo High School to inspire students. He had a large part in Marti Suber’s retirement party after her 30 years of teaching and was even willing to be involved as a guest director in the performance of one of his original plays. Lauren Sherr, formerly of Irmo High School, wrote, “Chris White has done amazing things since graduating from Irmo High School. He is a testament of the platform that the school can provide for students to begin successful careers. He is a true artist, and a beacon to all Irmo High School graduates.”

The Irmo High School Hall of Fame inducted their inaugural class in 2017.