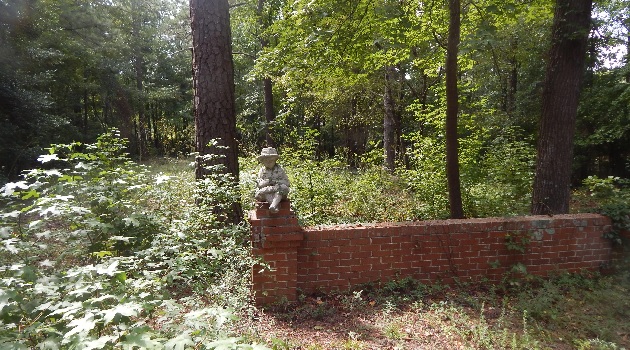 An abandoned cemetery in the heart of the Irmo residential community is hardly noticeable when you pass by on Arbor Lane.

All you will see is a roped-off blockade sign in front of a patch of woods. It hardly seems like the site of a cemetery. But just a few steps into the wooded area, tombstones, mostly sunken into the ground, become visible, though surrounded by a jungle of trees and weeds. The remnants of a brick wall with a small elf-like creature sitting on top can be seen at what was likely the entrance.

But that grim scene is about to change.

The town of Irmo now plans to seek a major restoration of the 10-acre site, which recently has been identified as a burial site for African-Americans dating back to the 1800s.

The Irmo Town Council became focused on the site after the Harbison Community Association formally requested that the town annex the site. The association had heard concerns about intruders entering the property and digging into the graves, apparently in search of artifacts. By bringing the site into the town of Irmo, it would have better surveillance because of the nearby Irmo Police Department.   But it’s more than a law enforcement issue.

Mayor Barry Walker Sr. said he has been informed by various sources that the site is historical because of the people who are buried there.

Walker said one of Richland County’s first African-American judges, Harold Boulware, is buried there. Before becoming a judge he was the chief attorney who worked on the historical Briggs vs. Elliott case. That case later merged into the landmark Brown vs. Board of Education, which ended desegregation in the U.S.  After his death in 1983, he was remembered as “a pioneer of the civil rights movement.”

The site is strongly linked to a historic African-American school known as Harbison Institute, which had its beginnings in Abbeville, SC, around 1882 and later relocated to the Irmo area at the current site of Midlands Technical College where it served students from approximately 1911-1958. Harbison Institute was one of the only places African Americans in the area could receive an education during those times. The Institute also had strong ties to the Presbyterian Church.

A former president of the college, C.M. Young, was also buried at the Irmo cemetery. Young was president when the school relocated to Irmo. The name was changed from Harbison Institute to Harbison Agricultural College.

Walker foresees plenty of help for a restoration project. Major players besides the town of Irmo could include Midlands Technical College, the Presbyterian Church and some local charitable organizations.