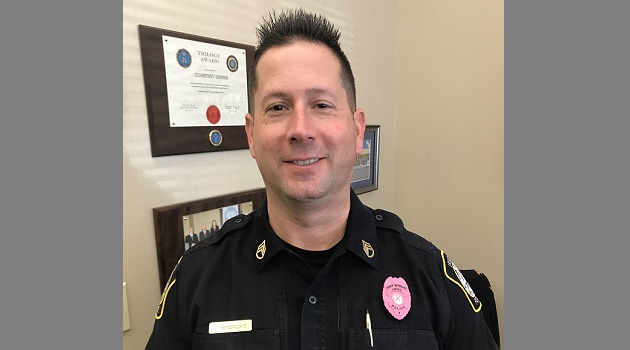 The Irmo Police Department may have started a trend in sporting pink badges, vehicle magnets and wrist bands in support of Breast Cancer Awareness month during all of October.

These magnets are showing up on numerous first responders vehicles in the Midlands including other law enforcement jurisdictions and the coroner’s office in Lexington County.

“We want to thank James Cassell and Chad Garner at Cassell Brothers Heating and Air along with The Karate Dojo and Fully Promoted of Columbia SC who made generous donations to help make this work for Breast Cancer Awareness,” said Chief Dennis. “The idea is was to create conversation starters to help bring attention to the American Cancer Society and the huge strides they’ve made in cancer research.”

Through the generosity of the sponsors no tax dollars were spent on these products.

Some of the officers are wearing the pink badges on their uniform in place of the traditional brass badges that police usually wear.

Chief Dennis said that when a conversation can begin about cancer it may help save a life and that the awareness often opens doors to other conversations.

“According to the American Cancer Society nearly half of all cancer deaths can be avoided through healthier lifestyles and recommended cancer screening,” said Dennis. “Prevention is a cure in itself.”