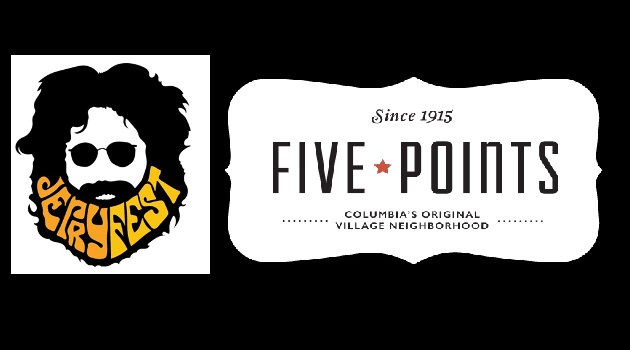 In honor of what would have been Jerry Garcia’s 80th birthday last week, the Five Points Association announces the return of JerryFest October 2. A free outdoor concert annually held on the first Sunday in October, JerryFest runs from 2 – 10 pm and features multiple bands all performing Jerry Garcia and Grateful Dead music.

JerryFest was started to commemorate the life and art of Jerry Garcia. Rock guitarist and musical icon, Garcia was best known as the lead guitarist for the Grateful Dead that inspired legions of followers known as “Deadheads.” The last time the Grateful Dead performed in Columbia was on Halloween 1985 at the Carolina Coliseum. JerryFest aims to recreate that atmosphere in Five Points.

Housed in various bars and clubs, JerryFest was started by Five Points’ local mom and pop hippie shop – Loose Lucy’s – over twenty years ago to commemorate the life and art of Jerry Garcia. In 2014, the owners of Loose Lucy’s – Don and Jenn McCallister – brought the festival to the Five Points Association because they had not found a venue that just felt “right” and decided that Five Points was the best place to call the festival’s permanent home. Amassing more than 500 attendees in that first year, it has remained one of Five Points’ signature events for the past eight years and has grown steadily.

The festival footprint expanded from the fountain plaza and Saluda Avenue in 2018 with the addition of the 2000 Block of Greene Street, to accommodate the more than 1,200 attendees to the Five Points village. In 2021, the festival swelled with 1,800 festival goers.

“JerryFest has been one of Five Points’ signature events for the past eight years,” said Katy Renfroe, Association Manager of the Five Points Association. “This festival has brought together the Five Points community for a day of unity, love, creativity and inclusivity. All ideals that are part of the fabric of the Five Points village every day. We love being able to commemorate this special day annually.”

Since its inception, the event has welcomed a myriad of demographic attendees – children, families, college students and senior citizens – annually to the Five Points village for a family- and pet-friendly afternoon of fellowship and music along with artisan crafts, food, beverage and merchandise vendors.

Longstanding festival partner, Loose Lucy’s, opened up shop in 1992 on Saluda Avenue in Five Points. It has been thirty years since their humble beginnings in the parking lots of Grateful Dead shows. Started by another entrepreneur, it was sold to Don and Jenn McCallister in 1997. In the beginning, there were multiple locations – Columbia, Charleston, Hilton Head and Myrtle Beach – but now Columbia is the only one remaining. At Loose Lucy’s, you will always find bohemian and alternative clothing at kind prices. They are a one-stop shop for clothing, gifts, accessories, rock t-shirts, skirts, blouses, dresses and sarongs. Loose Lucy’s also carries jewelry, incense, posters, stickers, tapestries, and more.

“Loose Lucy’s has now been in business as long as the Grateful Dead were a band, which feels a little weird to us,” says Don McCallister, Co-Owner of Loose Lucy’s. “Early in our married life together, Jenn and I decided we wanted two things: independence and staying immersed in the Dead scene, especially once Jerry passed away. Luckily, she worked for a pair of former Dead-lot entrepreneurs who had founded Loose Lucy’s and later initiated us into small business ownership. All these years later, it’s clear the shopkeep path was the best decision we ever made. And if there’s a secret to our longstanding success, it’s that we’re doing work we love.”

“Thirty years is a prestigious milestone that not all businesses make it to,” says Renfroe. “Five Points’ merchants, on the other hand, tend to have that longevity with their clientele. Loose Lucy’s thirtieth anniversary this August puts them in good company with several other merchants on Saluda Avenue that have reached that mark or longer. The Five Points Association is proud to congratulate Loose Lucy’s on this special honor, so we’ll add some special touches to this year’s JerryFest to celebrate them.”

JerryFest is also partnering with the Columbia Fireflies at Segra Park for their Grateful Dead Night September 9 against the Charleston RiverDogs. First pitch with the JerryFest Dancing Bear is set for 7:05 pm, and gates will open at 6 pm. Get there early as the first 1,000 fans in attendance will get a Fireflies Grateful Dead t-shirt. Tickets for the game start as low as $5 and can be bought in advance or day of at the Fireflies Box Office.

JerryFest will also have a booth at the game promoting the festival with a photo opportunity with the Fireflies’ very own Mason and JerryFest’s Dancing Bear. Additionally, there will be a giveaway of Grateful Dead items from Loose Lucy’s, Papa Jazz and the Columbia Fireflies, with entries being taken at the JerryFest booth.

Sponsorship, vendor and volunteer applications are open now. If you would like more information on these opportunities, or for an application, email [email protected] or visit FivePointsColumbia.com/JerryFest.