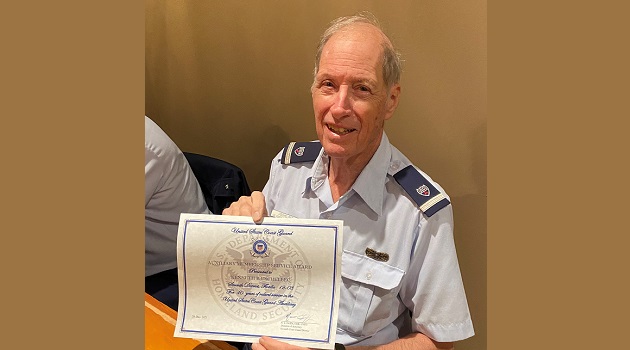 Article and photo by Barbara Burchfield

As a Coxswain qualified to Coast Guard standards, Uschelbec was trained to respond to lake emergencies and to offer boater assistance for many years on Lake Murray. His Grady White boat, docked at his lakeside home, was put into service as an Auxiliary Operational Facility under Coast Guard orders and ready for response.

Notable accomplishments during his volunteer service included providing lift zone security and vessel traffic control in 2000 for the historic recovery of the confederate submarine HUNLEY in Charleston Harbor, the 2005 recovery of a WWII B-25 Bomber that crash landed in Lake Murray on April 4, 1943, and the 30th G8 summit in Sea Island, GA in 2004 that required 24 hour patrols for 2 weeks.

During his 673 underway hours, Uschelbec and members of the Lake Murray Flotilla responded to and provided safety zones for a fuel spill of nearly 1,000 gallons of gasoline at a local marina in 1999, and in 2009 provided Auxiliary vessels for the recovery and transport to land of Army paratroopers who conducted jumps from C-130 aircraft into Lake Murray.

Uschelbec received a commendation and letter from U.S. Coast Guard Commander Peter J. Dinicola, Base Charleston, crediting Uschelbec for immediate and flawless response to a sinking boat August 17, 2000. The citation also noted the boat operator had taken a Coast Guard Auxiliary boating safety class that taught him how to use the marine radio for a May Day call, which contributed to the fast response of law enforcement and auxiliary vessels.

Uschelbec continues to support the local Lake Murray Flotilla with a wealth of knowledge, experience and good humor.

The Coast Guard Auxiliary is the uniformed civilian component of the U.S. Coast Guard and supports the Coast Guard in nearly all mission areas. The Auxiliary was created by Congress in 1939. For more information visit www.cgaux.org.