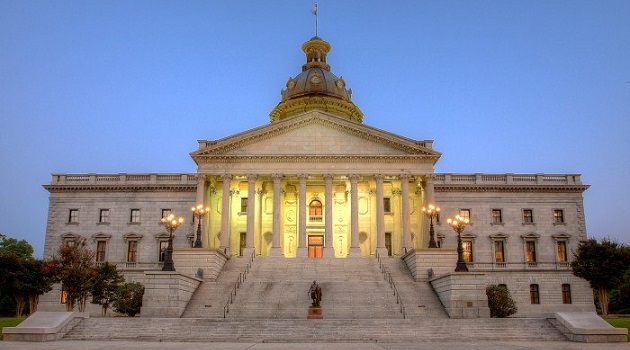 Thank you for allowing me the opportunity to serve as your State Representative in Columbia. With the first year of our two-year session complete, I wanted to share an update on the accomplishments and progress we made. This year was challenging and out of the ordinary in many ways. We worked to navigate uncharted waters as the pandemic challenged our state’s public health system, schools, economy and small businesses in ways we could not have fathomed. Despite these challenges, we held strong to our state’s motto: “Dum Spiro Spero”, meaning “While I breathe, I hope”

Here are just a few of the major accomplishments from this year’s session:

With the hard work of staff, my colleagues, and with the leadership of the Speaker, we passed the most conservative budget in South Carolina history. This budget funds only the essential functions of the State while protecting taxpayers and preparing for weather or health-related disasters.

For the full budget, visit https://www.scstatehouse.gov/CommitteeInfo/housewaysandmeans.php.

Here are some of this year’s top conservative budget highlights:

• 75 percent expansion of the state’s 4-K program and $1,000 raise for every teacher (in addition to a STEP increase) bringing teacher pay in South Carolina above the South East average

• $200 million for the S.C. Port to avoid high-interest debt

• Conservative budgeting and years of responsible planning allows for over $643 million in reserves.

My top priority is always to cut taxes in South Carolina. Each year, we pass a conformity bill to streamline the state and federal tax code for tax year 2020. We also passed a state and local tax bill which allows S-corporations, partnerships, and LLCs to deduct state income taxes on their federal tax return. This allows South Carolina’s small businesses to be on an equal playing field with big corporations. We extended the abandoned buildings tax credit, offering tax credits as a way to incentivize the rehabilitation of abandoned buildings. These bills make SC a better place to live and do business.

Maintaining the integrity of our elections is more critical now than ever. An important Republican agenda item passed this year was a bill to ensure our elections are run fairly across the state by prescribing a consistent process along with accountability measures. This legislation has two goals: To maintain the integrity of each and every vote cast, and to ensure elections are uniform across all 46 counties. This passed the House and will be up for further consideration when we return in January.

When private money is involved in public elections, the integrity of the election may be compromised. We voted to ensure NO private funds are ever allowed to fund county election boards for the conduct of elections.

We passed a bill providing that after 30 days the power to extend, modify, or discontinue a State of Emergency order falls into the hands of the legislature. The Speaker of the House and President of the Senate may call the legislature back, or 10 of our 46 county legislative delegations can elect to come in to modify the order. This important bill acts as a check to the executive branch and holds elected officials more accountable to the desires of their constituency.

Standing up for life is a central mission in South Carolina. The Fetal Heartbeat Bill is a historic, pro-life law that protects a baby-in-utero once a heartbeat is detected within six to eight weeks. Exceptions for rape, incest, and the life of the mother are included in the measure. I proudly supported this bill, which was signed into law by Gov. McMaster. Unfortunately, this law is now being challenged in court. We also voted to ensure that public money in the state can NEVER be used to purchase fetal remains.

Supporting our military personnel is always a priority. We passed legislation that eliminates the requirement that a veteran or dependent enrolled in a public institution of higher education within three years of a veterans’ discharge in order to receive financial assistance.

There is a shortage of the drug used to carry out the death penalty. Consequently, justice is not being served to those who have committed the most heinous crimes. S.200 allows for the death penalty to be carried out by electrocution, lethal injection or firing squad. This was signed into law.

The “Open Carry with Training Act’’ is the most advanced Second Amendment Legislation to pass out of the South Carolina General Assembly in over 25 years. Here’s what the law does:

• Relaxes the qualifications to become a CWP holder and addresses the shortage of ammunition by altering the CWP test from 50+ rounds to 25.

• Eliminates the $50 CWP fee to SLED, lowering the cost to become a permit holder and responsible gun carrier.

• Allows churches that meet on school property to choose if they will allow CWP holders to carry.

The House also passed a “Constitutional Carry Bill” providing that any person can carry a handgun, concealed or open, without a permit. It passed the House and is currently in the Senate where it can be debated as we enter into the second half of the session in January.  We have worked hard this session to protect and fortify our Second Amendment rights. South Carolina is now a Second Amendment Sanctuary State — no federal law that requires seizure of firearms will be enforced by state law enforcement officials in S.C.

Santee Cooper is our State’s largest asset and provides electricity to approximately two million South Carolinians. We passed a bill that implements a number of reforms, helps the agency to remain solvent and financially sound, and ensures accountability, transparency, and oversight. The Santee Cooper Reform Bill puts in place checks, balances, and guardrails to maximize the utility’s value with the ultimate goal of protecting customers and taxpayers.

We are always trying to improve the quality of education in South Carolina for both our students and educators.

• We championed legislation requiring all schools to offer five-day, in-person classroom instruction as of April 26. It also increases the current teacher earnings limitation for retirees to $50,000.

• We passed legislation that allows school districts to establish Schools of Innovation.

• STEP pay increases were reinstated for teachers and we secured a $1,000 raise for every teacher, bringing teachers’ salaries above the southeast U.S. average.

• It is important that schools educate students, but also allow children to think critically and form their own opinions. All public high schools and institutions of higher learning must require students to pass a course in the essentials of the US Constitution, the Declaration of Independence, the Emancipation Proclamation, and the Federalist Papers. Critical race theory is prohibited from being taught in K-12 schools.

• Finally, wearing a mask or receiving a COVID-19 vaccine is a deeply personal decision, so we worked to prohibit the mandating of wearing a face mask in K-12 schools. Colleges and universities are prohibited from mandating COVID-19 vaccinations or facemasks, too.

Getting Down to Business

This year we focused on reopening businesses after the pandemic and ensured they were able to thrive in South Carolina. We passed the COVID-19 Safe Harbor Liability Act, giving businesses that follow appropriate safety guidelines immunity from certain liabilities. This was an important step in getting South Carolina back to business. The “Gallo Winery Bill” amends and expands our state’s ‘quirky’ liquor laws to allow for wine tasting facilities and micro-distilleries.

This was one of the most productive years in the history of the South Carolina General Assembly. Not only did we recover from the pandemic, but we prospered and progressed by leaps and bounds, achieving many of our goals. I look forward to reconvening in September to take up redistricting and again in January for the second half of the session. Until then, if I can be of service or assistance to you, please do not hesitate to contact me. Via email at [email protected] or my 24-hour phone line at 803-331-8468.