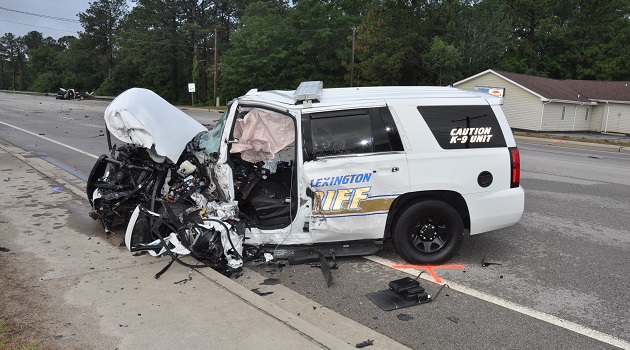 A Berkeley County man has been sentenced to 8 years in prison for a 2019 traffic crash that resulted in serious injuries to a deputy with the Lexington County Sheriff’s Department. Circuit Court Judge R. Ferrell Cothran, Jr. imposed the sentence earlier this week on Michael Jordan Nichols, 38. Nichols, formerly of Irmo, pled guilty to Felony Driving Under the Influence resulting in Great Bodily Injury. Nichols was sentenced to 15 years in the South Carolina Department of Corrections, suspended to an active sentence of 8 years. The prison sentence will be followed by 5 years of probation. There were no plea negotiations and Nichols was facing a maximum sentence of 15 years.

On the morning of June 8, 2019, Nichols was speeding and traveling in the wrong lane on South Lake Drive (SC-6) in the Red Bank area of Lexington County. The Chevrolet Silverado driven by Nichols slammed head-on into a fully marked Lexington County Sheriff’s Department Tahoe driven by Deputy Roy Hall, who was on his way to work.

It took responders 20 to 30 minutes to extricate Deputy Hall from the vehicle. Due to the extent of his injuries, Deputy Hall was transported to Prisma Health Richland. Hall suffered multiple pelvic fractures and a dislocation of his left femur, resulting in numerous surgeries.

Officers obtained a blood sample from Nichols pursuant to a search warrant. Later analysis conducted by SLED Toxicology determined that Nichols had a blood alcohol level of .19, indicating significant impairment.

As a result of his injuries, Deputy Hall is unable to continue his career as a law enforcement officer. At the plea proceeding, Hall and his wife addressed the judge describing how their lives have been forever altered, including the lives of their four young children. Lexington County Sheriff Jay Koon explained how the incident ended Hall’s career, resulting in a tremendous loss to the Sheriff’s Department. Sherriff Koon also expressed his appreciation for the work of all agencies involved, including the S.C. Highway Patrol and the 11th Circuit Solicitor’s Office.

11th Circuit Assistant Solicitor Todd Wagoner stated: “While we appreciate that Mr. Nichols accepted responsibility for his actions, we can only hope this tragic event will convince others to be responsible by choosing not to drive while impaired. There are many options available, especially during the holiday season, such as Uber, Lyft, Taxi services, and designated drivers.”

Nichols had numerous prior convictions, including Assault on a Female (2005) and Assault & Battery – 2nd degree (2017). Nichols is being transported to the S.C. Department of Corrections to begin immediate service of the sentence.