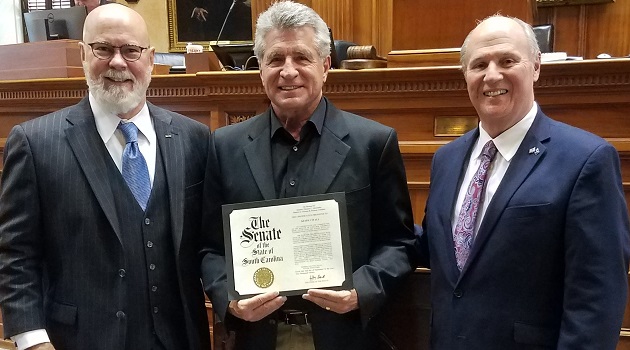 Mullikin named board chairman of Hall of Fame

Martial artist and global expedition leader Tom Mullikin was unanimously appointed
chairman of the board of directors of the South Carolina Black Belt Hall of Fame, in
Sept. 2020. He was unanimously selected for induction into the Hall of Fame in May
2019.

“We are thrilled to take our S.C. Black Belt Hall of Fame to the next level by appointing
Hall of Fame inductee Tom Mullikin as our new board chairman,” said Keith Vitali,
former U.S. National Karate Champion and one of Black Belt magazine’s top 10 fighters
of all time. “If you combine his leadership, energy and talent with our current president
Mike Genova’s equally strong gifts and leadership, great things are on the horizon for
the S.C. Black Belt Hall of Fame to use the martial arts platform to create a better
world.”

Mullikin, who chairs the gubernatorially established S.C. Floodwater Commission, is an
energy and environmental attorney, university professor, former U.S. Army officer and
retired commanding general of the S.C. State Guard. He has climbed scores of
mountain ranges on every continent (including summiting four of the world’s seven great
summits) and logged SCUBA dives in all oceans. He recently led the SOUTH
CAROLINA SEVEN expedition, a first-of-its-kind month-long trek across the Palmetto
State from the mountains to the sea, showcasing the seven natural wonders of S.C. and
creating greater awareness of the state’s environmental vulnerabilities.

Mullikin has been a student of martial arts for nearly 40 years; having studied and
practiced under martial arts masters throughout Asia and across North America. As a
formerly certified U.S. Army Master Fitness Trainer, Mullikin taught martial arts – self-
defense combatives – to U.S. soldiers. He later founded the Mullikin Martial Arts Studio
in Camden, and was the subject of a 2017 profile feature in BLACK BELT magazine,
the world’s leading martial arts publication.

According to BLACK BELT, Mullikin is “a fighter indeed” and “an accomplished martial
artist of several disciplines who holds a black belt in traditional karate,” adding, “His
[Mullikin’s] smile, his fortitude, and yes, his sheer grit, all came from the discipline he
learned as a young man – and has embraced his entire life – as a martial artist.”

Since its inception in the 1980’s (officially founded in 2012), the S.C. Black Belt Hall of
Fame has become “one of the most-respected martial arts halls of fame in the nation.”
Among its inductees are Vitali, Genova, and Mullikin; also “karate greats” like Sam
Chapman, Bobby Tucker, Steve Vitali, Bruce Brutschy, Marty Knight, and Tommy
Genova, among others. Recently restructured, the S.C. Black Belt Hall of Fame
includes the executive committee chaired by Genova, the board of directors chaired by
Mullikin, and an advisory council.