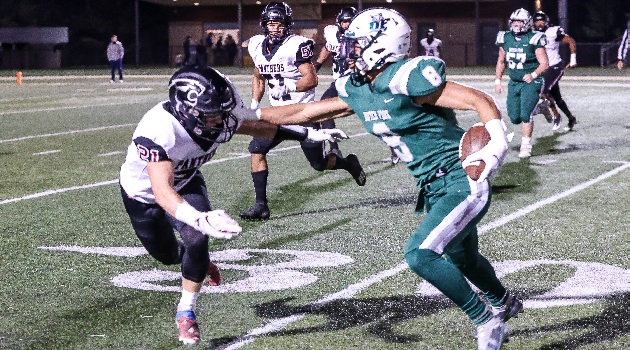 After last week’s second round of varsity football playoff games, there is just one District Five team still in the competition.

Dutch Fork (8-0) remains undefeated after the second round 63-42 win against Carolina Forest (8-2) and will play host to, also undefeated, Sumter (8-0) on Friday in the Class 5A semifinal round. The Sumter Gamecocks beat River Bluff, a Dutch Fork region opponent, last week 25-13 to advance to this week’s semifinals, aka the lower state championship game.

Competition becomes even tougher as teams advance through the playoffs. Teams with few losses, or none, are more likely to go head-to-head deep in the postseason, including this abbreviated postseason.

Now, on Friday, Dutch Fork and Sumter will each have their opportunity to advance to the state title game coming up next week.

In 5A upper state competition, T. L. Hanna will face Northwestern on Friday, with the winner of each of the semifinal games then playing for the state championship.

In last week’s Class 4A competition, Irmo (6-3) took a 41-21 loss against Catawba Ridge (7-1) to end its season in the second round. This is the first time in recent seasons that the Yellow Jackets have advanced to the second round of the playoffs.

Irmo lost just one Region 4-4A game this season in its first year as a Class 4A team since the start of the 5A category. That single loss occurred in the game versus A. C. Flora (8-0), the region leader.

It is the Flora Falcons that will now play host to the Catawba Ridge Copperheads when they return to the midlands Friday to take on A. C. Flora in the 4A upper state title game.

Back in 5A, Chapin (6-2) was at No. 2 in Region 5-5A much of the season, but River Bluff took over that ranking late in the season leaving the Eagles without a berth in the playoffs.

But that was not the end of Chapin’s season or its accomplishments. After defeating Irmo and York in non-region games in the last weeks of the regular season, the Eagles played arch-rival Mid-Carolina November 13 in the annual Battle of the Bell and came away with a 41-25 victory.

Chapin lost only to Dutch Fork and River Bluff during the entire season.

District Five will now be represented by Dutch Fork in its lower state title game against Sumter on Friday, and, if the Foxes win, in their effort to bring home another varsity football state championship title.