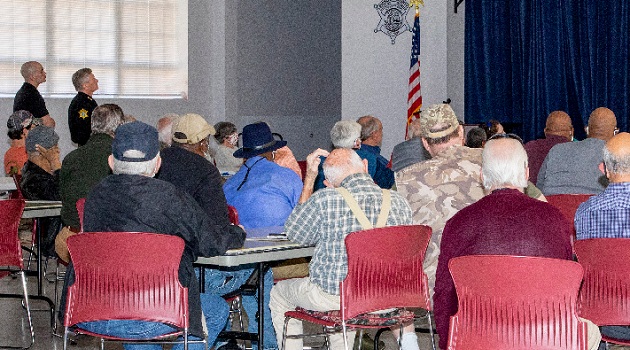 Sheriff Leon Lott, who has hosted the informal noon luncheon every year since the first gathering in 1998, presented gifts to all in attendance and recognized those within “the RCSD family” who had passed away the previous year.

The attending retirees were shown a video compilation of the Columbia protests-turned-rioting in late May 2020. The video was largely compiled from rioters’ cellphone recordings and later posted on various social media sites, which also led to scores of post-riot arrests.

“The legal, legitimate protests were peaceful,” said Lott who provided commentary from the floor as the video progressed. “The dangerous riotous actions of a few criminal opportunists following the protests were a different story. We’ve since arrested 102 of the riot suspects, and we are continuing to look at others who may have participated in that criminal activity.”

Lighthearted moments included the Sheriff’s display of a refurbished M1 carbine – an RCSD service weapon from the early 1960s – which one of the retirees had only recently returned to the department, as well as the recognition of 91-year-old Deputy Dewight Thomas, the oldest retiree present.

The Sheriff discussed the ongoing COVID pandemic, COVID protocols, and how the department has fared throughout the pandemic.

Encouraging the attendees to “look out for” their fellow retired and former deputies, Lott also urged retirees to keep the department updated as to any changes in their own situations.

“We’re all family, and we need to reach out to and care for one another as a family,” Lott said. “If you know of someone who used to serve in the department and is now struggling in some way, don’t let them deal with whatever they are dealing with alone. Let us know. There are always ways we can help someone out, financially, medically and mentally if they need it. They’re part of our family.”