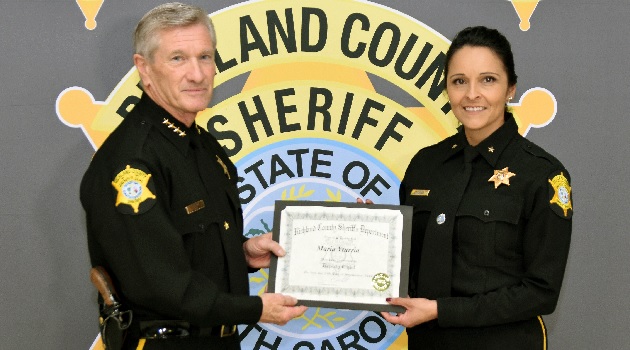 Richland County Sheriff’s Department (RCSD) Deputy Chief Maria Yturria became the highest-ranking Hispanic officer in the near-1,000-employee department when she was promoted from major to chief, earlier this month. As such, she is now the first Hispanic officer to hold the penultimate rank in the 235-year history of RCSD: Her official pinning having taken place on September 15, coincidentally the first day of Hispanic Heritage Month.

Yturria is now one of eight currently serving RCSD chiefs, all of whom are one rank above an RCSD lieutenant colonel and directly under Richland County Sheriff Leon Lott.

Why Yturria? Senior officials at RCSD point to her leader-shaping life’s story and law enforcement experience, a demonstrated ability to think and reason under conditions of extreme stress, proven courage, and a wellspring of empathy and compassion for others: All critically important virtues for a law enforcement leader in the 21st century. Simply put, Yturria was and is the best person for the job.

I know first-hand because I have worked closely with and for Yturria for more than six years, and as a former U.S. Marine infantry leader, I’ve been surrounded by sterling leaders and less-than-stellar hopefuls my entire adult life. Simply put, I know what it takes, and Yturria has it all.

THE MISSION, THE MEN, AND ME

One of the mantras which was hammered into me years ago – and which Yturria has always been a representative model of – is the principle of “the mission, the men, and me.”

In other words, mission first, then the men (today the people), lastly me. This doesn’t mean we neglect “me.” But it means the “me” comes after the mission and the people, but “me” still ranks high in terms of what’s important. We don’t neglect “me,” because if we were to do so, we would be no good to anyone. Nevertheless, “me” is always subordinate to the other two. That is how Yturria always approaches whatever needs to be done and she does so seemingly without effort.

Rare is the person whose leadership acumen is innate and without training. Yturria’s leaderships skills are a combination of both her natural gifts and years of leadership conditioning stemming from a life story that, so far, reads almost like a fairy tale where light overcomes darkness and good ultimately prevails.

Born near Guadalajara, Mexico in 1975, Yturria, formerly Maria Del Rosaria Saavedra, was literally carried over the border by her parents into the United States in as a one-year-old baby.

The family settled in Los Angeles. “I grew up in Maywood, a rough neighborhood where I eventually realized I would one day have to leave,” Yturria says, adding that she witnessed her first drive-by shooting, a gang-related killing at a birthday party across the street from her house when she was only 12.

Yturria did leave, at age 18, joining the U.S. Army and the Military Police Corps, leaving LA forever, but never her family – a mom and dad (both of whom today reside in S.C.), and three older siblings.

Following basic training at Fort Jackson in Columbia in 1993, Yturria shipped to myriad overseas duty assignments and posts across the U.S. It was during this time, she met and soon married her husband of 22 years, Armando, a now-retired U.S. Army Special Forces sergeant major.

In 2002, a daughter was born. Yturria was honorably discharged from the Army at the rank of sergeant, and soon thereafter she went to work for RCSD: First as an unpaid reserve deputy in 2003, then joining the force as a full-time deputy in 2004. She has since held varying positions up through the RCSD rank-and-responsibility structure from patrol deputy to, as of last week, CHIEF of RCSD’s Office of Professional Development.

Life has been good for Yturria, but hardly easy by anyone’s standards with enormous ups-and-downs even in her adult life: And I’m barely scratching the proverbial surface of any of that.

Yturria credits her family with providing the strength she has needed to summon in difficult times. “When I think of the difficulties of living and growing up in a dangerous neighborhood as I did when I was a child, I don’t think nearly as much of the dangers and fears of that existence as I do the joy I felt simply being around my family, the celebrations, the meals we shared, and the love we all had and still have for one another,” she says. “It made it very difficult for me to leave my family in 1992 – and my parents didn’t want me, the baby of the family, to leave – but I knew I had to.”

Sheriff Leon Lott says Yturria best exemplifies all that is noble and virtuous in an RCSD leader. “I think it’s obvious to all that Chief Yturria’s love of family and commitment to her own family is something that has transcended the ranks of RCSD,” says Lott. “It’s reflected in her own unique brand of leadership – born of shared familial hardships – where she sincerely feels a sense of familial love for those under her command, those above her, and those she serves.”

As the new Chief of Professional Development, Yturria is in charge of hiring, retention, recruiting, training, public information, and crisis intervention, among other responsibilities. And like the other seven chiefs, she reports directly to Sheriff Lott.

Aside from her primary departmental responsibilities, Yturria has always made it a point to hone her field policing skills, often working nights as a patrol officer in one of RCSD’s seven jurisdictional regions (not counting the downtown Columbia courthouse region). She also spends time at church, takes care of family and friends, and works on special projects within the department often running interference for and with those surrounding her and finding creative solutions for problems as they arise.

Yturria trains at a nearby crossfit gym. She distance-runs. She’s taught self-defense tactics to women. And she serves as RCSD’s Crisis Management Team leader, police jargon for a combination hostage negotiator and mental-emotional support leader for deputy sheriffs involved in special operations.

SUPERWOMAN? Yturria says, “no.” Though her level of work, energy and ever-sunshiny disposition, despite a somewhat unique, markedly tough upbringing and a few challenging professional experiences, might suggest otherwise.

During the demonstrations-turned-riots of May 2020 in downtown Columbia, while working shoulder-to-shoulder with Sheriff Lott who was directing formations of deputies as cars burned and protestors raged, Yturria was struck by a thrown rock. She dismissed it at the time, but later learned her finger was broken in the attack. All in day’s work, she says. “It comes with the territory and I love my job, even on the tough days, though most are good and filled with rewards both for myself and those around me.”

Having won numerous awards, including law enforcement officer of the year honors from the American Legion, Yturria is a graduate of the S.C. Criminal Justice Academy, the University of Maryland, and the FBI National Academy. She has been with RCSD for nearly 20 years.