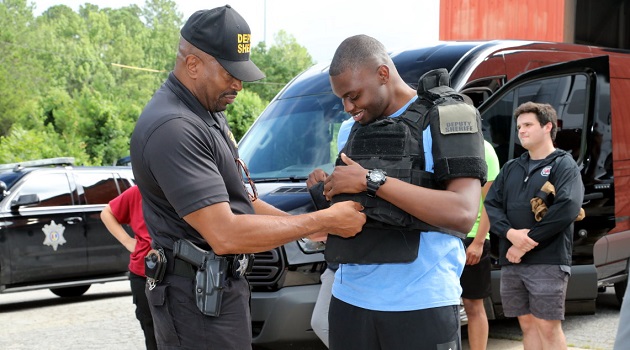 The RCSD Internship program began June 9 with an initial class of 13 interns: College and university students majoring primarily in criminal justice, but also chemistry and other disciplines intersecting the study of forensics.

For the past eight weeks, the 13 reported to RCSD, Tuesdays and Thursdays from 9 am until noon, for training and administrative-and-operational familiarization ranging from physical fitness testing on the agility course, defensive tactics, live-fire weapons familiarization on the range, to working in the forensics lab. The interns also rotated through different RCSD units, spending time with Victim Services, the Criminal Investigations Division, the various patrol regions (including ride-alongs), Community Action Team, Gang Unit, Aviation Unit, Special Response Team (SWAT Team) and the K-9 unit.

Lott said, “They leave here not only with a far greater understanding of who we are and how we work-and-interact with the communities we’re sworn to protect, but they now understand that everyone has a stake in law enforcement.”

Deputy Josef Robinson, who serves as the program coordinator, said: “I believe we may be the first in the state in which law enforcement interns have had such a hands-on approach. The Sheriff is providing interns with a tremendous opportunity to learn about what it takes to be a law enforcement officer and the challenges we face.”

For more information about the RCSD Internship Program, visit RCSD.net.