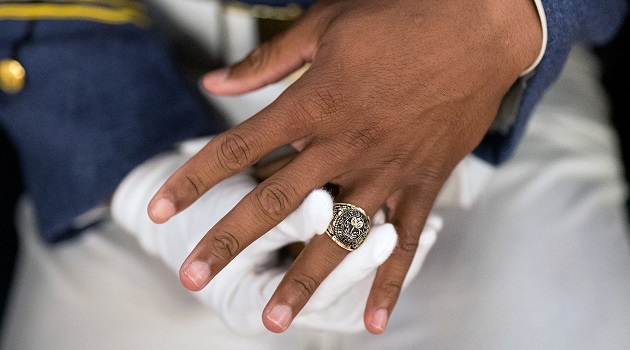 The Class of 2022 marched across Summerall Field, directly into Summerall Chapel, where the rings were presented on Friday, Oct. 1.

Local cadets who received their rings include:

“The presentation of the rings represents our commitment to The Citadel and our accomplishments as a class,” said Cadet Kathryn Christmas, Regimental Commander of the South Carolina Corps of Cadets. “The Class of 2022 has been waiting patiently for this day. We will wear them proudly.”

One of the very first acts the cadets performed after receiving their rings was to salute The Citadel War Memorial – marching by in rows of four – as they left the Chapel.

After, the cadets sprinted back to their barracks before beginning their first weekend with a Band of Gold on their hands.

“Ring Presentation is something we have all dreamed about from our early days as knobs. Then, it seemed like an eternity away – yet here we are, getting to join the brother and sisterhood of those who wear the ring,” said Cadet Grayson Gasque, Deputy Regimental Commander of the South Carolina Corps of Cadets. “For the Class of ’22, our rings symbolize the culmination of our efforts here at The Citadel and the efforts of those who helped us along the way. From this day forward, we have the privilege and responsibility of wearing the Band of Gold.”

The Citadel, with its iconic campus located in Charleston, South Carolina, offers a classic military college education for young men and women focused on leadership excellence and academic distinction. The approximately 2,400 members of the S.C. Corps of Cadets are not required to serve in the military, but about one-third of each class earn commissions to become officers in every branch of U.S. military service. Citadel alumni have served the nation, their states and their communities as principled leaders since 1842. The Citadel Graduate College, founded more than 50 years ago, offers dozens of graduate degree, graduate certificate and evening undergraduate programs in the evening or online. Consecutively named Best Public College in the South by U.S. News & World Report for 11 years and No. 1 Best Public College for Veterans in the South for four years. Learn more about Our Mighty Citadel here.