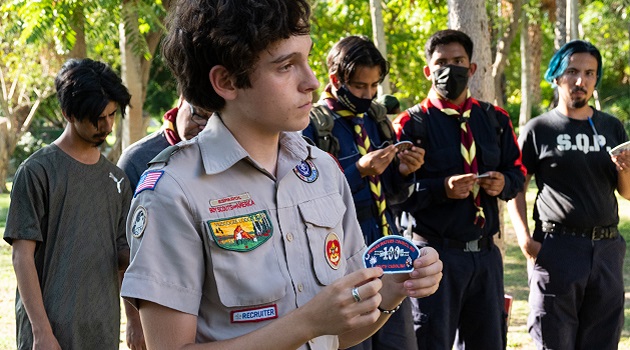 Turning Trash into Treasure: A Scout is Helping to Fight Cancer Internationally!

One innovative member of the Boy Scouts of America in the Midlands has found an indefinitely sustainable method for fighting cancer and he has taken the battle internationally!

If Scouting is the place where young people can grow to become their very best future selves, Christian Norris, of Troop 312 in Irmo, SC, is well on his way!

After working his way through the scouting ranks, in pursuit of the Eagle Award, Christian decided that he wanted to design an Eagle Scout Service Project that would make a valuable impact in a broader international community.

As a Mexican-American student and scout, with ties in both countries, he discovered that the largest concentration of cancer in all of Latin America exists in Torreon, Coahuila, Mexico, which happens to be the birthplace of his mother.

Christian partnered with Casa Feliz, an organization that provides meals, housing, and treatments for children with cancer, whose families otherwise could not afford them.

He raised money in a number of ways, including the sale of his used school uniforms, working with the members of his Scout Troop to conduct a local car wash, coordinating and hosting a food event at a church in Palm Beach, Florida, and designing a GoFundMe page for private donations. He used 100% of those funds to have a metal shop manufacture heart-shaped collection bins for recycling plastic bottle caps, which is a common practice in Mexico. Christian collaborated in the strategic placement of each collection bin throughout the city.

Christian also coordinated the service hours of Scouts Mexico, who distributed and collected bags of plastic bottle caps from their own neighborhoods. A private company in Mexico donated 10,000 printed recyclable collection bags, a $6,500 donation. The company wanted to ensure that the collection of the bottle caps continued and used the Scouts to distribute the bags. The hope is that the bags will remind people to continue collecting their bottle caps and deposit their collected bottle caps at each new heart grand opening and beyond.

Every time the collection bins are filled, the plastic is recycled, and the recycler gives the funds to Casa Feliz to enhance their mission. Christian originally committed to delivering (5) collection bins, but the project has taken on a life of its own and has already produced (20)!

The Consul General of Mexico in Atlanta, GA, the Latin American Association of GA, and even Congressman Joe Wilson’s SC Office have all lent a hand in the success of this project!

The most exciting news is that on average, these 5-foot collection bins are producing 312 lbs of recyclable plastic every 6 days! That equates to just over 3 TONS every 6 days. According to Casa Feliz, that is enough to pay for cancer treatments for 16-17 kids every 6 days in Mexico!

Better yet, the recycling collection bins are designed and coated to last for decades. As more bins continue to be placed, the fight against cancer lasts indefinitely.

If you wish to donate to further the project, please visit:

Even during these pandemic times, this project is one of many service projects this year that allows members of the Boy Scouts of America to give back to communities.

For more information on the Boy Scouts of America and local service projects, contact the Indian Waters Council at www.indianwaters.org or 803-750-9868.