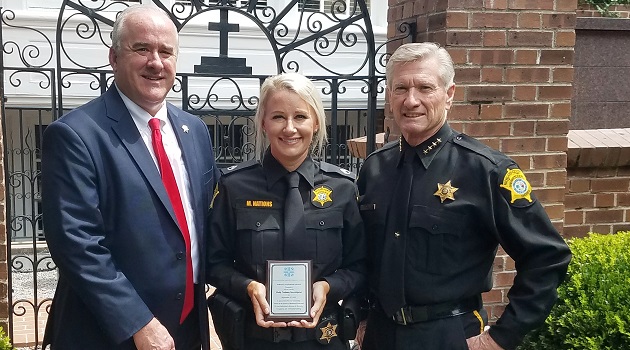 According to a letter sent to each agency in July from Rev. Brian Marsh, associate pastor at Eastminster, the church “desires to do more to acknowledge and affirm front-line responders who go above and beyond in the areas of character, compassion, and community building.”

Eastminster Presbyterian presented Nations, Gilbert, and the other six recipients with personally engraved plaques and a check each for $1,000.

“As one of our ‘Kingdom Goals,’ Eastminster Presbyterian Church is in the second year of honoring nominated servant leaders from five local first-responder agencies for their selfless service and protection of our community,” said Jane Shuler, chair of Eastminster’s first-responder servant leader awards committee. “This is one of the ways in which we express how grateful we are for their service.”

“On this Servant Leader Sunday, we recognize these five agencies without which our community would not be a community,” Smith said.

Various members of the church presented each award to each recipient and recognized family members present. Investigator Nations received her award from Betty Meadows, and Cpl. Gilbert received his award in absentia from Andy Cameron, who presented the award to Richland County Sheriff Leon Lott who accepted the award on behalf of Gilbert.