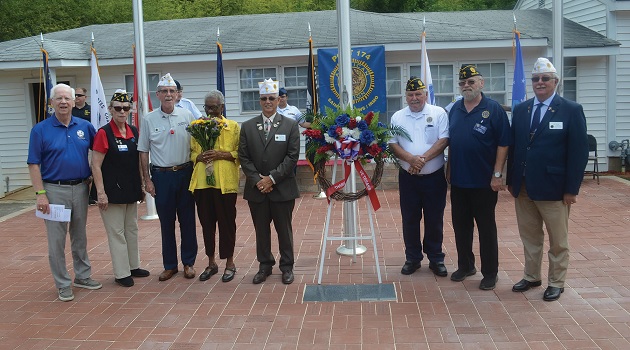 A Veterans Memorial Dedication of American Legion Post 174 was conducted on Armed Forces Day Saturday, May 21 at 11 am. The post had been recently updated and refurbished with a memorial brick garden and flag terrace. Flags from all the branches of the military were on display including the new US Space Force.

Post 174 Commander Timothy Taylor opened the ceremonies by welcoming the Irmo High School AFJROTC under the direction of Major Jason Huffman and Master Sergeant Mark Kroll as the Honor Guard and the Irmo AFJROTC Cadets as the Color Guard. The invocation was held by Harlan Triplet, Lt. Col. US Army Chaplin Ret., who held up his father’s Purple Heart medal. The Keynote Address was presented by Ronald E. Price who was elected as Commander of the American Legion Department of South Carolina.

Miss Mattie Lee Nixon was on hand for the ceremony. Her family has lived in and around the Post for a decade and was purchased from her relative’s estate. Miss Mattie is 92 years old and has watched over the Post since 1997.

Department Vice Commanders of SC Jim Jarvis and Jim Kvam were present for the ceremony.