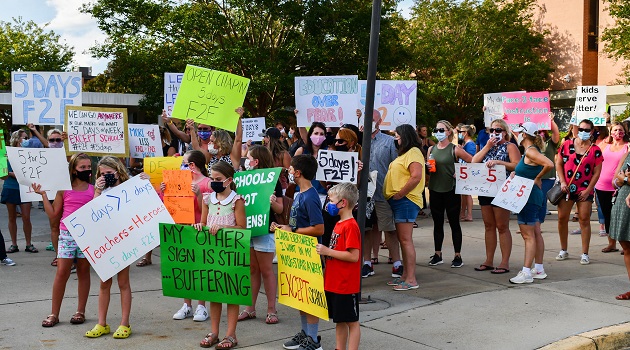 Lexington-Richland District 5 students must get back into a regular 5-day school week.
That was the message of a large group of protestors, mostly parents and students, who showed up at Monday’s board meeting.

A group estimated at around 100 stood outside the building with protest signs and chants of “face to face” just before the board meeting started. During the public comment session of the meeting, several parents sharply criticized the board for continuing a hybrid schedule instead of returning to a regular classroom schedule.

District 5 started its fall semester last Tuesday with a hybrid plan, with students learning in class two days a week, and completing assignments remotely the other three days.

The district had earlier planned to resume regular classes October 8, but Superintendent Christina Melton has delayed that start-back as the district continues to monitor the coronavirus numbers. At Monday’s meeting, she acknowledged a lot of people were hoping for a new announcement confirming the October 8 return but she said it’s not the time to do that.

That delay has led to a public backlash from parents who say students are not adjusting to remote learning and are in need of a regular school schedule.

“When your kids have a meltdown all day long, you know something is wrong,” said one parent. 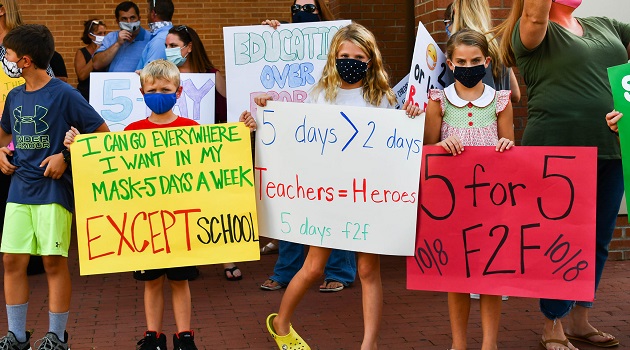 “We need leaders to step up,” said Rebecca Hines, who has announced her candidacy for the school board. “Silence on the board is deafening. There shouldn’t be an organized protest to get a response.”

Another parent said the board has created “a political policy” and is not listening to parents.

A lot of the discussion centered on whether the board or the superintendent, should have the final word on a school schedule. Some parents observed during the public comment period that board members are the “voice of the people” who elected them and should be in charge of any major decision.

Board member Jan Hammond said it’s appropriate to put voters who elected board members behind the plan.

“It allows us to move forward,” she said.

But board member Ed White said the superintendent is much better equipped to make such a decision than board members.

Before the vote, board member Beth Hutchison said she has heard a lot of different opinions on the issue.

“We were bombarded by people in favor,” she said. “There are split differences. This is difficult for everyone. I believe Dr. Melton and her team are qualified. We need to listen to the experts.”

Hammond’s motion failed by a vote of 4 to 3. She was supported by board members Ken Loveless and Nikki Gardner, but board members Robert Gantt, Ed White, Beth Hutchison and Michael Cates voted against it.

But in an apparent effort to show support for an eventual reopening, the board approved a motion by White supporting a return to the 5-day schedule on October 8 or when the superintendent deems it safe to do so. That motion was supported by the same board members who voted against Hammond’s proposal.

Hammond said after the meeting that White’s motion didn’t change anything.
Following the vote, the board held a lengthy discussion on construction costs at the new elementary school site. Construction officials were questioned about costs resulting from unsafe soils.

Loveless, who runs his own construction business, visited the site and discussed possible problems when the project began. But some board members questioned his involvement with school construction projects as his own company recently put in a successful bid for a $1.25 million project underway on a state property owned by SLED.

As a school board member, his involvement could raise ethical questions, according to some board members.

Loveless said he has never used his board position to advance any of his company’s construction projects.