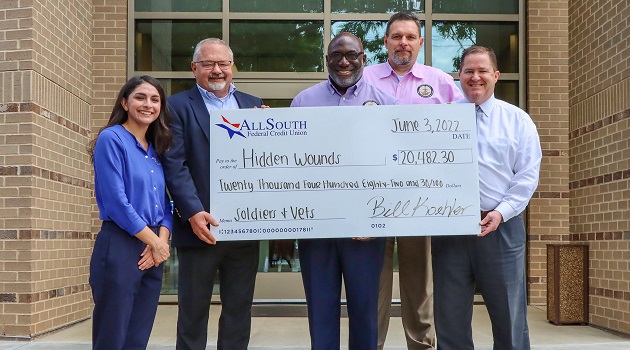 AllSouth Federal Credit Union proudly hosted its 20th annual Soldiers and Vets Charity Golf Tournament on Thursday, May 19, 2022, at Golden Hills Golf and Country Club in Lexington, South Carolina. Thanks to the generosity of the participants, sponsors, and donors, the Soldiers and Vets 2022 Charity Golf Tournament raised over $20,000 for local organization Hidden Wounds. Lance Newman, Executive Director of Hidden Wounds said “Partnering with AllSouth Federal Credit Union has been a true blessing. Hidden Wounds is an ‘in the weeds’ organization that helps those others who have been left behind. AllSouth has made it possible for us to bring mental health first aid training to veterans and those who serve veterans at no cost to them. AllSouth has chosen to join the fight in a big way, and we are truly grateful for their contribution to our fight.”

Through the help of volunteers and AllSouth team members, the Soldiers and Vets Charity Golf Tournament is dedicated to bringing awareness to and supporting local military causes in the Midlands. Since 1996, AllSouth Federal Credit Union has helped raise over $336,000 in support of local military charity organizations. “We proudly carry the tradition of supporting our military. Hosting this golf tournament allows us to show our continued support for the military and local organizations. It is part of our mission to give back and help make a difference in the communities we serve,” said Bill Koehler, AllSouth Federal Credit Union President & CEO.