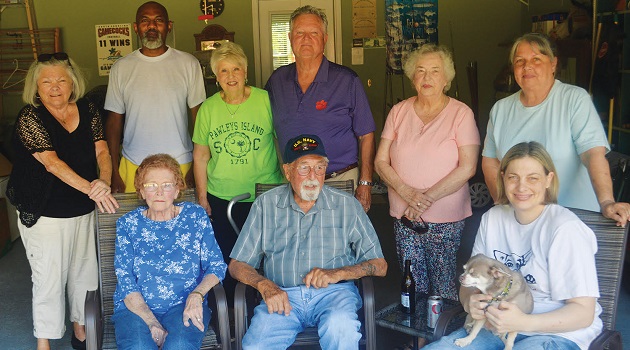 John Cordan: the ‘mayor’ and part of the Greatest Generation

Every evening, on a quiet little corner of a quaint development in Harbison, John Cordan and his lovely wife, Mary, hold court with a dozen or more of their neighbors just as they have done for nearly 10 years.

“We gather here and talk and talk,” said John. “We have the best neighbors around.”

Married 71 years, the Cordan’s sit side by side in the garage on lawn chairs as neighbors spill out into the driveway sometimes bringing friends or children with them. The members of his court affectionately call John ‘the mayor’ and all share in the camaraderie of the moment.

“We’re the best corner in Carmel Commons,” said Mary. “We keep it light and don’t talk politics or religion.”

John Cordan turned 95 this past week and if you didn’t know better you’d think he was in his early 70s. Sporting his US Navy cap, the spry and fit veteran spent time overseas during WWII.

John served as a radio operator on a tanker during WWII at the tender age of 17 having joined the service just before the end of the war. The USS Monongahela was assigned to the Pacific Fleet and operated continuously with fast carriers participating in every major central Pacific operation shuffling aviation fuel gasoline, fuel oil, diesel oil and ammunition to the flattops or aircraft carriers during the liberation of the Philippines.

“I remember we fueled quite a few hospital ships,” said Cordan. “We ran out of Manilla, Okinawa and the Subic Bay.”

After the war, John traveled as a professional musician playing the trumpet and trombone until he met Mary. John and Mary began their relationship after meeting at a large Italian wedding in Beaver Falls, PA. Mary had attended the event with two of her girlfriends and when the wedding was over they needed a ride home. John offered to take them all home but Mary insisted that he take her girlfriends home first and then come back for her.

Soon they were married and honeymooned in Cuba stopping in Mt. Pleasant, SC so Mary could visit some family.

“After putting up with years of snow and cold and slush we decided to stay,” John reflected. “We spent 41 years in Mt. Pleasant and then here for the last 30 years.”

John went to work for Sears and Roebuck and after 34 years retired in 1985. They migrated to Irmo to be closer to their sons who had attended the University of South Carolina and their three grandchildren. John did some volunteer work for the Make-A-Wish Foundation and traveled around the state fulfilling wishes from children with a terminal disease.

“One child wanted to visit Hawaii and we made that happen,” said John. “Another wanted to visit the Pope.” John also volunteered at Sharing God’s Love in Irmo. John still loves woodworking and staying active.

John’s ‘court’ threw a special birthday party for him on Friday, June 3. It wasn’t a surprise because John knew what was on the menu. “We’re having filet mignon,” said John.