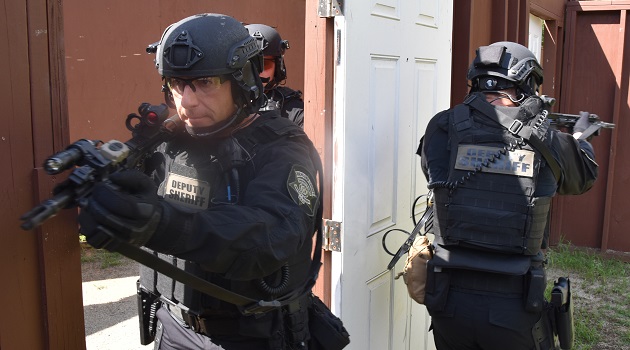 A rifle-armed recruit from Fort Jackson hijacked a school bus with 18 children aboard, Thurs. morning, May 6. The suspect, who has since been arrested (but whose name has yet to be released), demanded that the bus driver “drive him to another town,” according to Richland County Sheriff Leon Lott.

The incident began around 7:00 a.m. with students enroute to Forest Lake Elementary School. The children, obviously frightened, “began asking several questions [of the hijacker],” said Lott during a post-event press conference. “They wanted to know if he was going to hurt them or the bus driver.”

The suspect eventually ordered the students and the driver off the bus. He then drove the bus several miles before abandoning the vehicle on the side of the road, leaving the weapon – a standard military M4 carbine – on the bus, and then fleeing on foot.

Within minutes of receiving the call, members of the Richland County Sheriff’s Department (RCSD) Special Response Team (SRT) were on site with one tactical entry team, a second reserve team, and with supporting elements and additional equipment including RCSD’s MRAP (Mine-Resistant Ambush Protected) vehicle enroute.
Immediately upon arrival, the SRT operators, who had been planning and gathering information enroute, quickly boarded and cleared the bus and recovered the M4 rifle.

“Our SRT guys did a great job,” said RCSD Capt. Michael Prichett. “Response time was good. We were working elements from the road. And with the information we were receiving, everything turned out great.”

RCSD patrol deputies apprehended the lone suspect without incident near Interstate 77. He will be charged with multiple counts of kidnapping.

“I think God looked down on these kids this morning and wrapped His arms around them and took care of them,” said Lott. “As you can imagine these kids were scared to death along with the bus driver.”

Lott added, “I want to give the bus driver credit: He kept his cool. He didn’t overreact. He didn’t get excited. He kept everyone calm. His main concern was the safety of those kids.”