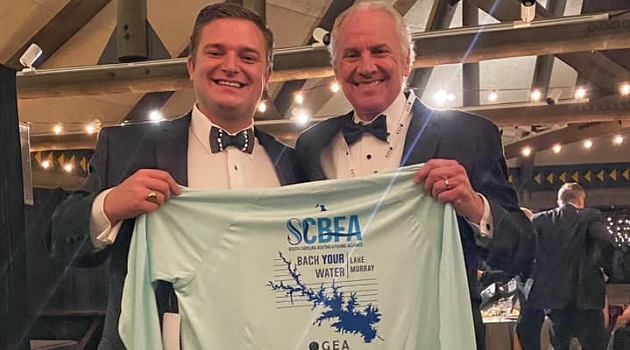 BACK YOUR WATER campaign promotes clean, vibrant waterways in S.C.

The South Carolina Boating and Fishing Alliance (SCBFA) and Global Eco Adventures (GEA) are teaming up in a new conservation campaign to help promote and protect several of the Palmetto state’s lakes, rivers, and other waterways; including Lakes Hartwell, Wylie, Murray, the Santee Cooper lakes, even Charleston’s storied harbor, and others.

Billed as BACK YOUR WATER, the centerpiece of the campaign between the two non-profits is a project featuring the sale of special S.C. waterway shirts (at a cost of $40 per shirt) with donations from each shirt-purchase going toward parallel efforts to enhance and conserve the various waterways across the state as well as helping fund recently developed floodwater monitoring programs.

According to a statement released May 18 by the SCBFA: “Outdoor enthusiasts have the opportunity to get some brag swag sun shirts featuring their favorite waterways with the added bonus of conserving and protecting the state’s world-famous waterways.”

Gettys Brannon, CEO of the SCBFA, says BACK YOUR WATER benefits everyone.

“South Carolinians love their waterways,” says Brannon, pictured here presenting Gov. Henry McMaster with the first ‘Back Your Water’ long-sleeve t-shirt. “We are excited for South Carolinians to be able to wear their water and contribute money directly back to the waterways we all enjoy.”

Made by Local Boy Outfitters of Columbia, each shirt will feature one of several of Palmetto State’s most popular waterways.

“We are proud to stand with the S.C. Boating and Fishing Alliance as part of the ‘Back Your Water’ campaign,” says GEA founding director Tom Mullikin, who also serves as chair of the S.C. Floodwater Commission. “This partnership between SCBFA and GEA is important. The Alliance is an important voice protecting our state’s waterways, and every dollar contributed to GEA will go directly to our programs for floodwater monitors, habitat restoration, and water cleanups.”

Ross Self, chief of Freshwater Fisheries with the S.C. Dept. of Natural Resources, agrees.

“We are excited to see SCBFA partnering with GEA to raise monies for these important resource issues,” says Self. “I am particularly excited to see the inclusion of habitat enhancement as a priority. Habitat has become an increasingly critical issue as the state’s reservoirs age and the timber and woody debris that existed when the waterways were impounded have broken down over time. Enhancement of larger reservoir habitat is a huge effort and will require innovative thinking and partnerships to really move the needle.”

Waterway usage both commercially and recreationally is vital to the state’s economy.
Though S.C. is the 23rd most populous state in the U.S., it ranks seventh in terms of registered boats per capita and sales of more than 725,000 fishing licenses per year.

“Boating and fishing are S.C.’s most popular outdoor recreational activities,” says Brannon. “And we all are responsible for protecting our natural resources for future generations. For years, GEA has been dedicated to this effort. Every penny donated will go directly to their conservation efforts.”

The Back Your Water campaign is being launched in conjunction with the first annual South Carolina Boating and Fishing Week which the S.C. General Assembly has set for the week of June 6-13, 2021.

To purchase BACK YOUR WATER shirts, please visit –
cap-clothing.com/clients/south-carolina/