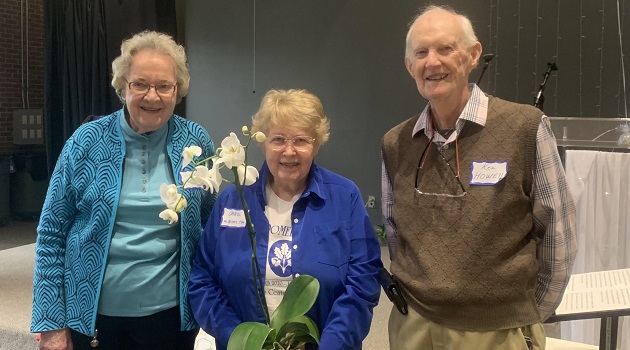 Shepherd’s Centers of America (SCA) has announced that Carol McGinnis Kay, a member of the Shepherd’s Center of St. Andrews, with headquarters at Columbia’s Ashland United Methodist Church, is the recipient of the 2021 Donald Owen Smith National Volunteer Leadership Award.

The award, which recognizes top volunteers in the SCA network for service in helping older adults lead meaningful lives through connection with each other and the community, is the highest award given in recognition of volunteers from around the Shepherd’s Center national network.

Dr. Kay, Distinguished Professor of English Emerita, USC-Columbia, has served continuously with the Shepherd’s Center of St. Andrews for 18 years, first as a volunteer instructor and subsequently in leadership roles: as chair of the Adventures in Learning Committee and as a member of the Board of Directors, including terms as secretary, president (2010, 2011, 2017, 2018), and past president.

When the Covid pandemic ousted members from their headquarters and caused other Shepherd’s Centers to shut down, Dr. Kay was a driving force in the St. Andrews Center’s successful transition to Zoom offerings – 13 in the recently completed Fall session, with an enrollment of some 200 seniors. She is also the one responsible for developing, designing, and editing the St. Andrews Shepherd’s Center brochures that announce upcoming courses.

“Volunteers are the backbone of Shepherd’s Centers,” said Sarah Cheney, Executive Director of SCA, in presenting the award. “Without volunteers, we would not be able to deliver our mission of connecting older adults to life-enriching experiences, which has been even more important during the global pandemic. Carol McGinnis Kay embodies the passion, commitment, and joyful caring at the heart of this prestigious national award.”

Amy Crook, Executive Director of Shepherd’s Center of St. Andrews, said, “No task is too big or too small, and leading by example is important to Carol. She inspires others with her enthusiasm, her positive and caring attitude, and her determination to see that the programs offered to meet the interests and needs of participants.”

Center member Ken Howell, who led the team that nominated Kay, said: “When I read the invitation from Shepherd’s Centers of America to submit nominations, I immediately thought of Carol. From the moment she joined Shepherd’s Center of St. Andrews, she was more than a member—she was a force for excellence, high standards, and change for the better which has never slackened. I can’t think of anyone who more deserves this national recognition.”