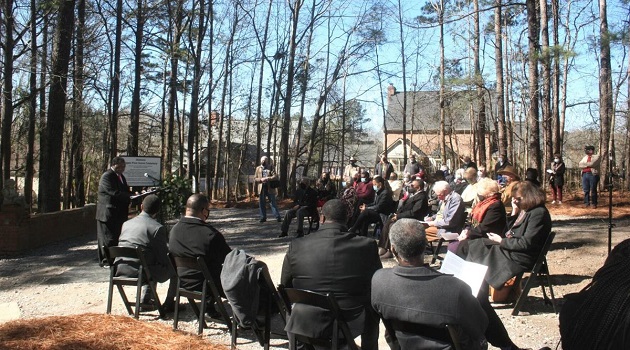 Local leaders called it a celebration of black history.

The event Saturday was actually a “Restoration Ceremony” attended by several community leaders including Irmo Mayor Barry Walker Sr. They gathered at the site of the old, abandoned Upper Pine Grove Cemetery just off Archer’s Lane in the heart of Irmo to celebrate a make-over of the once-abandoned site where more than 30 African Americans are buried.

At the opening of the celebration, Walker described the event as “a powerful moment” as those forgotten citizens are finally being remembered. The 10-acre burial site, which dates back to the 1800s, was “abandoned by everything but nature,” he said.

The site was hardly noticeable by passersby, though it is located close to a large residential area in Irmo. It was roped-off with a blockade sign in front of a heavily-wooded, jungle-like area.

It hardly seems like the site of a cemetery but just a few steps into the woods was a scattering of old tombstones, still marked with names and dates. What was most noticeable was the statue of a child sitting atop a small brick wall.

Walker said he first learned about the history of the site from Dr. Donald Rhames, president of Midlands Technical College, who had read about it in a history book.

While having a meal together at Lizard’s Thicket, Walker and Rhames decided to look into the origins of the cemetery, after learning that some of those buried at the site were known leaders in the African-American community.

At the time, the Harbison Community Association formally requested that the town annex the site as concerns were expressed about intruders entering the property and digging into the graves, apparently in search of artifacts. By bringing the site into the town of Irmo, it would have better surveillance because of the nearby Irmo Police Department.

The Irmo Town Council agreed to the annexation, but Walker decided it’s more than a law enforcement issue.

Before becoming a judge he was the chief attorney who worked on the historical Briggs vs. Elliott case. That case later merged into the landmark Brown vs. Board of Education, which ended desegregation in the U.S. After his death in 1983, he was remembered as “a pioneer of the civil rights movement.”

The site is strongly linked to a historic African-American school known as Harbison Institute, which had its beginnings in Abbeville, SC, around 1882 and later relocated to the Irmo area. It was located near the site of the current Midlands Technical College Harbison campus

The school served students in the Irmo area from approximately 1911-1958. Harbison Institute was one of the only places African Americans in the area could receive an education during those earlier times. The burial site had close connections to those students.

A former president of the school, Charles M. Young, was among the people buried at the site.

One of the attendants recognized during the ceremony was Zaidee Morris, 92, a life-long resident of Irmo. Her parents were the campus caretakers at the Harbison Institute when she was born in 1928, and they and her grandparents were buried at the site.

In partnership with the Harbison Community Association, the town of Irmo, the Arbor Day Committee, Harbison Garden Club, Lexington County Master Gardeners and the Presbyterian Church, a restoration has already dramatically changed the appearance of the site.

The brush and weeds have been removed. Burial sites that have so far been identified can be recognized. The site is identified by signage and is now surrounded by fencing.
As the restoration continues, Irmo leaders say the cemetery will likely become a historical site that will attract visitors. An effort is now underway to place the site on the National Register of Historical Places.