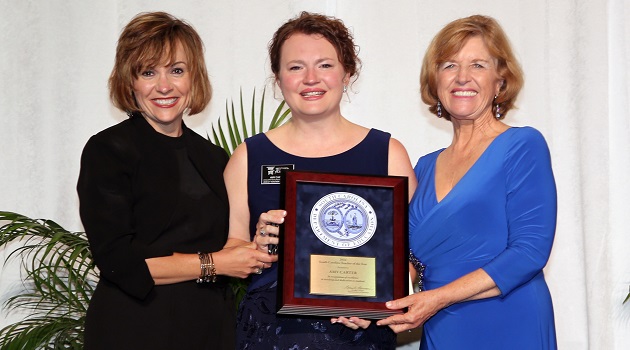 Lexington-Richland District 5 is celebrating as two of its own have been named education champions.

District 5 Superintendent Christina Melton was named the State Superintendent of theYear by the South Carolina Association of School Administrators (SCASA).

“Amy’s leadership in and outside her classroom, and dedication to her students have uniquely qualified her for this prestigious honor,” said Superintendent Spearman. “I look forward to seeing her represent South Carolina’s over 55,000 teachers as she advocates for the profession over the next year.”

Superintendent Melton said Carter has teaching experiences in several communities and used her relational approach to education to make lasting impacts while demonstrating true leadership inside her classrooms and beyond.

Carter said she has learned that passion for teaching can impact students.

“To let your light shine means to show your passion in teaching to your students, who will share that passion “It translates into enthusiasm,” she said in an interview with The Irmo News.

Carter sees the role of a teacher as that of a mentor.

Carter, a Chapin resident who has a son and a daughter attending District 5 schools, has taught for the last 20 years. Before teaching at Chapin High, she taught at Dutch Fork High School and at a school in Chester County.

With her most recent professional investment in the school’s Teacher Cadet program, Carter hopes to make an even greater impact as an advocate for public education by inspiring hopeful future educators that may one day become our colleagues.

The South Carolina Teacher of the Year serves for one school year as a roving ambassador providing mentoring, attending speaking engagements, working with teacher cadets and teaching fellows, leading the State Teacher Forum, and serving as the state spokesperson for over 55,000 educators.

As recipient of the state Teacher of the Year awards program, she will receive $25,000 and a brand new BMW for one year.

Melton said her designation as Administrator of the Year is a “true honor” and part of a team effort in the district.

“My mission is to make a positive difference in the lives of the children and teachers in our community. I couldn’t be successful without the support of everyone in this system. It’s definitely not a singular award, but a system award because I couldn’t do what I do alone.”

Melton has served in various education rolls for more than 20 years. She first served District Five as the principal at Nursery Road Elementary from 2007 to 2012 before taking on the Director of Elementary Education role. She was later selected as the chief instructional officer for the district.

She has been recognized several times for her services.