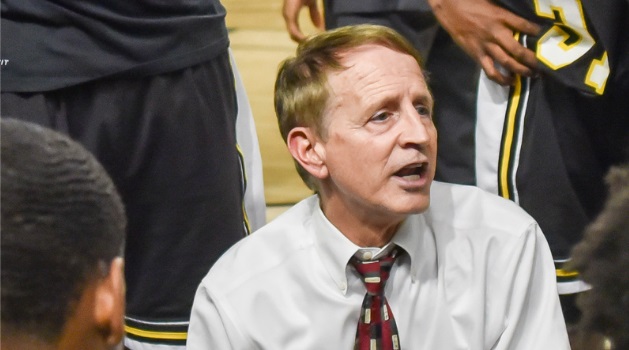 Irmo High School varsity basketball coach Tim Whipple has been named by his peers as the 2021 South Carolina Co-Region 4A Coach of the Year. Whipple will share the honor with A.C. Flora coach Josh Staley.
“It is always an honor to receive recognition from your peers. Even more so with the challenges presented this season by the pandemic,” Whipple said. “It was a difficult year for coaches, but even more so for the players and their parents. I am so very proud of the young men in our basketball program who simply refused to allow the circumstances to affect their work ethic. Certainly, without their efforts I never would have been in consideration for this honor. I would like to take this opportunity to commend Dylan Williams and Julian “Juice” Kiett for being selected to the All-Region team.  Dylan Williams was also selected to the 4A All-State team.”
Whipple has been a physical education teacher and boys basketball coach at Irmo High School for 40 years. The Hall of Fame basketball coach has compiled an amazing record of 792 wins and 294 losses. Whipple is ranked 2nd in state history in total wins (792) and his ten (10) State Championship appearances are the most of any 4A/5A coach. The Irmo program also has won 19 Region Championships under his leadership, including nine seasons of being undefeated in region play. His teams have been to the South Carolina state playoffs in 37 of 40 seasons. The 4A region includes A. C. Flora High, Dreher High, Irmo High, Lugoff-Elgin High, Richland Northeast High, and Westwood High.
Whipple is a 1977 graduate of Erskine College and later earned his M.Ed. in Secondary Administration and Supervision from the University of South Carolina. In October 2001 Coach Whipple was inducted to the Erskine College Athletic Hall of Fame and was elected to the South Carolina Basketball Coaches Association Hall of Fame in 2011.  Most recently, Whipple reached the pinnacle of state coaching honors when he was inducted into the South Carolina Athletic Coaches Association Hall of Fame.
Irmo High School principal Dr. Robin Hardy said, “Coach Whipple is the epitome of excellence in athletics. As our legendary basketball coach, with a rich history of success on the court, Coach Whipple promotes the growth and development of the whole student. Our players are better men because of his leadership and care.”