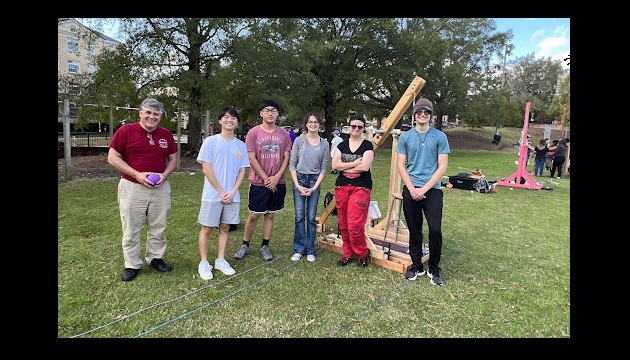 Members of the InvenTeam from The Center for Advanced Technical Studies placed 2nd place at the Annual Pumpkin Chunkin’ competition and Fall into Science Festival. Theta Tau, a professional engineering fraternity at the University of South Carolina (USC), hosts this yearly event. The competition was held on Saturday, November 12, at the Solomon Blatt Physical Education Center Field located on the University of South Carolina campus in Columbia.

The Fall into Science Festival promotes STEM through hands-on exhibits in conjunction with the Trebuchet Pumpkin Chunkin’ event. Numerous displays of STEM-related topics to the engineering programs were on display with many activities.

The InvenTeam is a group of students who promote a culture of invention. They engage in problem-based learning that fosters STEM-based skills. The environment of the InvenTeam is one that promotes teamwork and idea-sharing while promoting a mindset of civic-mindedness. The Pumpkin Chunkin’ teams were judged on three aspects: ‘Knowledge & Presentation of Design’, ‘Repeatability’, and ‘Maximum distance’. In the repeatability event, the two throws scored were within 2 feet of the mark. The maximum distance achieved was 124 feet. The Knowledge & Presentation of Design portion required the team members to verbally describe the design process they used to create and optimize their trebuchet.

The team competed with a traditional rotating arm trebuchet which was modified from the previous year. The weight-driven catapult threw a two-pound ball using a maximum of 100 pounds of counterweight. The machine was also designed to be broken down so that it could be transported in a mini-van. The assembly of the machine was accomplished in less than 5 minutes.

Martin Cwiakala, the InvenTeam coach said, “Theta Tau has been very supportive of STEM at the High School Level with their Pumpkin Chunkin’ and Rube Goldberg competitions. The Fall into Science Festival for elementary students is a great bridge between elementary and high school. The elementary students get to see the cool things they can do in High School.” Ryan Riddle stated, “The event pushed us to our STEM limits and helped us grow as a team.” Jason Wu stated, “This event not only helped promote engineering and STEM as a whole, but it also helped to bridge the gender divide currently present in the engineering field.”