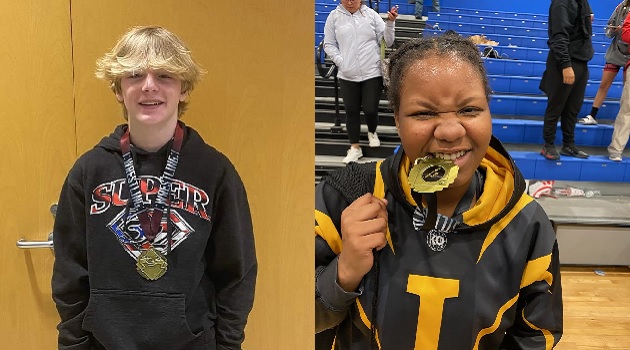 The Carolina Invitational Wrestling Tournament, sponsored and organized by the South Carolina Wrestling Coaches Association (SCWCA), is the last tournament of the season for the qualified South Carolina Junior Varsity and Middle School wrestlers.

Chapin Wrestling Coach Bret Dye described White as a coach’s dream, “Preston is a fantastic worker, teammate, and athlete, so he is very easy to coach. He is going to do a lot of big things in and for this program and we are very lucky to have someone like him in our program that we know will be a leader both on and off the mat for years to come.”

White was pleased with his result and noted his dedication to the sport in achieving his goals, “It felt amazing to accomplish one of my goals this year of winning a State Championship with all pins and going undefeated my whole middle school season. It shows that all of my hard work and sacrifice is paying off.”

The prestigious tournament awards the top 4 places in 14 Junior Varsity weight classes and 14 Middle School weight classes. In 2011, a Girls Division was added to the tournament and has seen much success since.

Ballard began wrestling for Irmo Wrestling Coach Nicholas Wilcox in November, and Coach Wilcox noted her great improvement through the season. “Keora has come a long way since she walked into our room in November. Each day she comes in and battles against the boys in our room and never backs down. There were moments where she doubted herself but she never quit. This is our second girls state championship in the last three years and her winning this award shows how far girls wrestling has come. Lots of girls look up to her and she’s made a ton of friends in the sport. We look forward to having her on the high school team next year.”

Ballard said of her achievement, “Winning this award means a lot to me. There are not many girls who have accomplished this and I’m proud to represent my team and Irmo Wrestling.”

In order to attend the Carolina Invitational Wrestling Tournament, wrestlers participating in the event qualified through an Area qualifier and advanced through the Sectional qualifiers held throughout the season and state of South Carolina. The following School District Five students also placed in the Tournament: