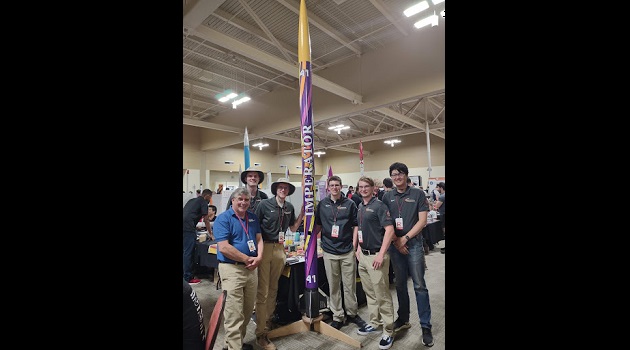 More than 1,300 participants, representing 95 higher education institutes from 16 countries around the world, competed this year. Students compete by designing, building, and testing rockets that lift a payload to 10,000 or 30,000 feet. Categories based on engines used include Commercial Off The Shelf (COTS), Student Research and Developed (SRAD) Solids, and SRAD Hybrid/Liquid engines.

Preparation for the Spaceport America Cup competition takes most of the year. Teams register, and then they must design a rocket for their chosen altitude and engine category. One requirement is to have a level 3 high-power rocket certified advisor. The students then design and build their rockets. During this process, status reports are required and graded for competition points. A design report is required for teams to fly their rockets at the competition event. Students again received competition points for their reports. These reports range from 50 to 250 pages and must describe the engineering process, construction, and component testing of their rockets. At the competition, rockets are inspected to ensure safety. A day of design poster presentations takes place, again providing the teams with points. Some teams are selected for podium design presentations which enable them to compete in the separate design competition awards. Approximately a third of the points in the competition comes from documentation. The bulk of the points depends on rocket performance; how close the team comes to their target altitude.

Dr. Cwiakala was part of a three-person team assigned to judge seven teams. The teams assigned were the University of Turkish Aeronautical Association, Clemson University, Iowa State University of Science and Technology, University of Leeds, University of Strathclyde, University of California Berkeley, and the University of Samsun. Reports were evaluated a week before the competition. Podium presentations were also judged to determine which teams would be selected for podium design competition presentations. Poster and podium sessions took place at the Las Cruces Convention Center in New Mexico. While at the convention center, students met representatives from various aerospace companies. Companies represented were Sierra Space, Spaceport America, Virgin Galactic, Siemens, Raytheon Missiles and Defense, Northrop Grumman, Honeywell, Blue Origin, The American Institute of Aeronautics and Astronautics, Aerojet Rocketdyne, The National Association of Rocketry, Tripoli Rocketry Association, and New Space New Mexico. This was a wonderful way to start a rocket competition. The remainder of the competition was held at Spaceport America in Truth or Consequences, New Mexico, where the rocket flights took place.

At Spaceport America, the pit areas were organized, and students had their rockets inspected before their flight attempts. Each team only had one competition flight. For many teams, this was the first time flying their rocket. It is not common to find a field supporting flights to 10K or 30K. All the rockets flown had GPS location devices to help speed the recovery process. On Saturday, an ice cream social and awards took place back in the Las Cruces Convention Center after the judges’ deliberation.

Of the teams judged by Dr. Cwiakala, LURA, the team from Leeds, UK, won an honorable mention for the design of their parachute ejection system that requires minimal black powder. It allowed them to test and fly their rocket in the UK, where black powder is highly regulated. The South Carolina team from the Citadel took second place in the 10K COTS engine competition. When Dr. Cwiakala was asked why he engages in judging science fairs and
engineering competitions, especially ones that require him to spend time in the desert, he responded thusly: “Seeing what young people do in science and engineering competitions never fails to awe me. They give me hope for the future.” Dr. Cwiakala also toured the Engineering department at the University of New Mexico to see their rocketry preparation areas.

Dr. Cwiakala attended the Spaceport America Cup as part of his professional development.