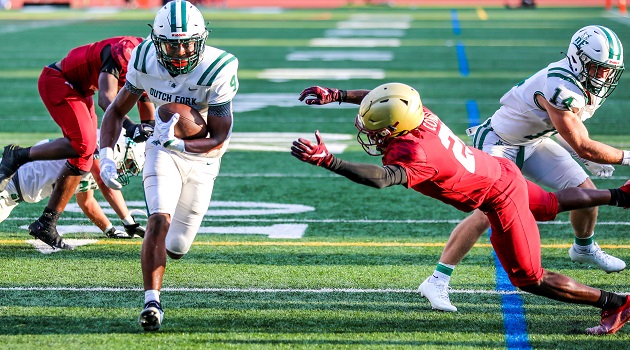 District teams on the right path

Three weeks into the high school football season, District Five teams are posting more wins than losses, and the future is looking bright.

Dutch Fork’s Silver Foxes are off to a good start in their effort to build another long string of uninterrupted wins with a current 3-0 record of non-region games in the early season.

The Foxes have posted road game victories against Hough (NC)(27-24), Spartanburg (27-25) and, most recently, Creekside (GA)(21-13). With the competition Dutch Fork has scheduled for their early season games, it appears that the wins are more competitive and the Silver Foxes are preparing even better for a good run through the region games and the playoffs.

Dutch Fork will be on the road again Friday when they travel to Goose Creek to take on Stratford. The Knights are at 0-2 heading into this week’s game after a season opening loss to Avon, of Ohio, and last week’s loss to Lexington.

The Silver Foxes will play one more road game next week, at North Augusta, and then take on visiting St. Frances Academy of Baltimore, MD in their first home game of the season September 23.

Also with three games now recorded, Irmo’s varsity football team has lost only one of them — the last one. After the season opening win against Chapin (22-11) and then the 27-20 victory at Lancaster, the Yellow Jackets visited River Bluff last week where they took a 49-6 loss against the Gators.

After a scoreless first quarter, Irmo began the second quarter inside the River Bluff 20-yard-line and completed the drive with a field goal to put the first points of the game on the scoreboard.

River Bluff answered with a touchdown and PAT to go ahead 7-3. Irmo then got inside the Gators’ 20-yard-line again, and again Jose Villanueva made good on a field goal to bring Irmo within one point of River Bluff.

After that it was all Gators racking up the points.

Irmo has a vacant date this week and will play next week at home when the Hartsville Red Foxes visit for the Yellow Jackets’ Feeder Schools Night.

Chapin’s varsity has also recorded three games. After the opening loss to Irmo, the Eagles have won two straight games: They won the Battle of the Bell against archrival Mid-Carolina in a big way (45-0) and then beat Spring Valley last week 28-10.

This week Chapin will play host to Newberry on Friday working to add another win to their record, and the Bulldogs (0-2) will be working to post their first victory of the regular season.

After this week there will be another week of non-region games, and then region competition begins.