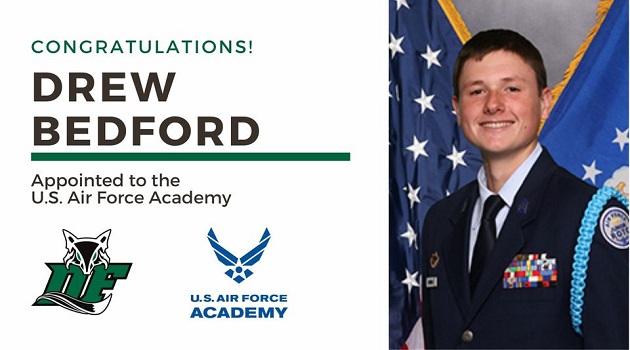 Dutch Fork High School senior Drew Bedford has been appointed to the U.S. Air Force Academy (USAFA) in Colorado Springs. Bedford received a full scholarship and plans to major in Aerospace Engineering and hopes to fly “fighters” for our country after graduation.

“It means a great deal to be one of few selected to attend USAFA, and my elation could not be put into words,” Bedford said. “I have worked towards this for the better part of two years, and all my hard work, from getting up before 5am every morning to work out to staying up late studying and doing homework has paid off.”

Bedford served as a Deputy Commander for JROTC at Dutch Fork High School and also the Drum Major for the marching band.

“Andrew has done a superb job within the Dutch Fork High AFJROTC program and has been an exemplary student leader in other areas of the student body, as well,” Major Reginald Slade said. “He is a young man of high character and spiritual faith! It was incredible to witness an uncommon level of initiative, self-discipline, and time management that he exhibited, in the midst of COVID-19, to prepare for an appointment to the Air Force Academy. We are super proud of him and can’t wait to see the great things that he will do in the future!”

All service academy appointees must be nominated, typically by U.S. Senators, Representatives, and Delegates. Due to the “Honor Unit” designation of the Dutch Fork High School AFJROTC program, Andrew received his appointment based on the nomination authorization of his JROTC unit.