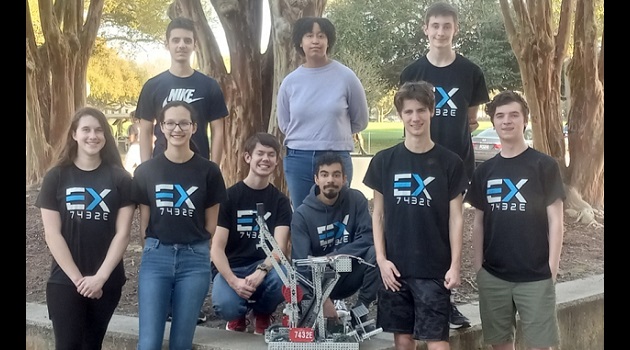 Dutch Fork High School’s Vex Robotics team competed in the South Carolina Vex Robotics High School State Championship held at The Citadel March 5 and took home a Design Award. The Design Award is presented to a team that has the best engineering notebook. In this notebook the team is expected to document their entire design process of the competing VEX robot.

The team made up of Eli Bryson, Edwardo Cea, Josie Fields, Matti Khilqa, Paul Kupfer, Emma Meihofer, Jacob Parker, Camden Spehl, and Arabella Walter and coached by Andrew Bell qualified for the World Championship by winning the Design Award at the state level.

“I am extremely proud of both of Dutch Fork High School teams for competing at the state championship,” Andrew Bell said. “In order to even get to the state level of the competition you have to prove that you are one of the 38 best teams in the state. In order to get to the world competition you have to show that you are in the top 10, from our state. To win the design award that means you had the best engineering notebook in the state.”

The next steps for the team are to have a virtual judges interview, submit their notebook electronically and then travel to Dallas, Texas to compete against teams from not only the United States, but also across the world. The competition will be held in May. The Vex Robotics World Championship brings together over 1400 teams from around the world.

“We are so proud of Mr. Bell and the Dutch Fork High School Vex Robotics teams,” said Dutch Fork High School Principal Dr. Gerald Gary. “Their hard work is now leading them to a globally recognized competition that brings together student-led creations with real-world innovators with organizations such as NASA, Google, and Texas Instruments. Vex Robotics is a great opportunity for our students to be at the forefront of twenty-first-century skills and real-world applications.”

The STEM (Science, Technology, Engineering and Math) Program at Dutch Fork High School is an honors magnet program that accelerates and enriches learning experiences for students who are academically gifted and have an interest in a STEM related major and career. Students apply for the program during their 8th grade year. Acceptance is based on their standardized test scores, middle school teachers’ recommendations, current academic performance, and interest in STEM related fields.