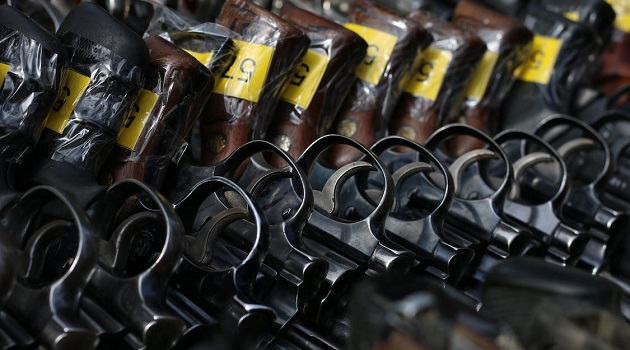 The Okra Strut Commission, responsible each year for the Okra Strut Festival, is planning on using an anticipated surplus of funds from last year’s festival to pay for a gun buyback event on Saturday, December 10. The host is the Universal Outreach Church and the event is designed to remove guns from the streets of Irmo.

“We have always tried to help out where we can,” said John Lindower, Okra Strut Commission Chairman. “Helping the police department is a good cause.”

However, it’s unsubstantiated if the Okra Strut can afford such a generous offer as the financials for the festival had not been submitted to the town at the time of this printing. And why is a festival sponsoring something as controversial as a gun buyback event?

Gun buybacks are iffy at best because it’s a way for political entities to spend money and look like they are actually doing something good for the community.

The idea is to get unwanted guns off the streets by giving out gift cards in return for the guns.

According to studies on gun buybacks they “have done little to reduce gun crime or firearm-related violence.”

Studies also suggest that “handguns recovered in buyback programs are not the types most commonly linked to firearm homicides and suicides.”

“Irmo is not in that kind of high-traffic crime area where a buyback might be more effective.

The program would allow at best for people who have no attachment to an unwanted weapon to be able to get them into the hands of law enforcement. The weapon could possibly be lost or stolen or neglected to a point where it becomes more dangerous than it is. The program would allow them to remove that weapon from their responsibility.”

If the Okra Strut is funded with hospitality and accommodations tax funds, they legally cannot spend their surplus funds on such a program. Those monies can only be spent on tourist-related events. Maybe there is a way for that $25,000 to be spent on the purchase of another dozen portable defibrillators. The town received a grant of $27,000 for 12 AED units to be placed in patrol cars. Another dozen AEDs would ensure all patrol cars could carry at least one. The town also approved new visual/audio equipment to update the municipal building that the Okra Strut Commission could have easily purchased for them.

The Okra Strut Commission is playing in politics in an arena where they don’t belong. “I’m a Second Amendment guy,” said Lindower. “So it’s not about that.”

The optics is that the town is laundering hospitality tax money through the festival to put on the buyback program. Since gun buyback events have proven ineffective the town moving forward with it should raise questions. The Okra Strut Commission has no business playing in politics and needs to save their money to upgrade its entertainment for the coming year.

The Okra Strut is a two-day festival that was created by the Lake Murray/Irmo Women’s Club to help fund a public library for the town of Irmo. As it grew it became unmanageable for the women’s club and the event was purchased by the town. A commission of volunteers was formed to plan the annual event with a budget approved by the town and money collected from sponsors.