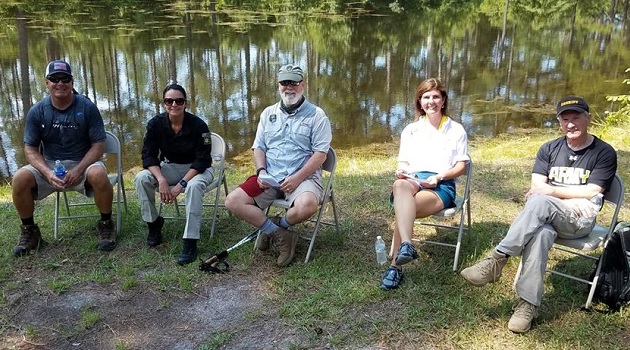 Five of the SC7

The SOUTH CAROLINA SEVEN (SC7) expedition led by S.C. Floodwater Commission Chairman Tom Mullikin passed through the Midlands last week during their month-long, 500-mile, 90 to 100-plus degree heat trek from the mountains (in the Upstate of S.C.) to the sea (in the Lowcountry). This picture was taken Wed., July 15, at the Heise Pond Alpine Lodge where SC7 participants stopped for lunch, a “fireside chat,” and an awards
ceremony.

Among the award recipients, was Richland County Sheriff Leon Lott, who was presented the Environmental Champion award by Global Eco Adventures for his disaster-response leadership both as sheriff and as commander (and previously deputy commander) of the S.C. State Guard (SCSG) during the many hurricanes and other tropical storms that have plagued South Carolina since Hurricane Joaquin in Sept. 2015.

“Leon Lott is one of my lifelong heroes,” says Mullikin, who commanded the SCSG prior to Lott. “And today he [Lott] is not only the most-celebrated lawman in the nation, he’s a stalwart law-enforcement leader right here in South Carolina who has embraced our communities rather than fighting with them”.