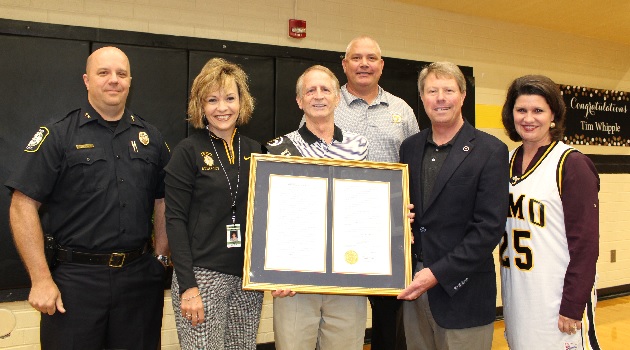 A small surprise ceremony was held at Irmo High School International School for the Arts to honor Tim Whipple for his 40-years of teaching and coaching at the school.

Whipple was honored with a State House Resolution by Representative Chip Huggins congratulating him on his fortieth year as the Irmo High School boys head basketball coach. The school also designated June 16 as “Tim Whipple Day.”

“It was a special moment and I was totally surprised,” Whipple said. “One of the things I tried to do during the presentation was to enjoy the moment.”

Whipple has been a physical education teacher and head boys basketball coach at Irmo High School for 40 years. The Hall of Fame basketball coach has compiled an amazing record of 792 wins and 294 losses. Whipple is ranked 2nd in state history in total wins (792) and his ten (10) State Championship appearances are the most of any 4A/5A coach. The Irmo program also has won 19 Region Championships under his leadership, including nine seasons of being undefeated in region play. His teams have been to the South Carolina state playoffs in 37 of 40 seasons.

“Tim Whipple continues to teach children and adults alike,” said Irmo High School principal Dr. Robin Hardy. “He exudes leadership and vision and what it means to be a true team player.”

“This is about the journey because I think in athletics we think about winning a championship or what the last game is all about,” Whipple said. “I have found, at least in my career, that it is not about the last game. It is about the journey and each one of those experiences that happen during a season or a year that build character and lifelong lessons that you learn. Irmo is a special place to me because I have been here for the majority of my life and it will always be important to me and special.”