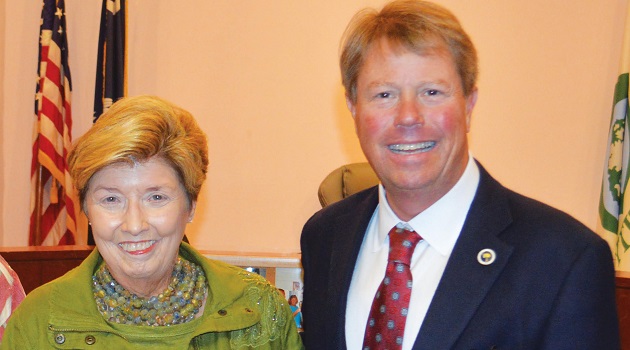 Kathy Condom honored for 18 years of service to Irmo

Friends and constituents honored Irmo Councilwoman Kathy Condom with a celebration Friday at the Irmo Municipal Building in recognition of her 18 years of service.

Condom is now completing her fourth term and does not plan to seek re-election. She presently serves as mayor pro-tem.

As she looks back on her years on council, she cites that the most important accomplishment was the town’s decision years ago to do away with town property taxes, an accomplishment few towns and cities in South Carolina have achieved.

She is also very proud of her action to have the town’s police officers’ weapons equipped with a light that enables them to quickly shine into dark places during investigations.

Condom said the town’s development of the Irmo Community Park is definitely one of the town’s most important accomplishments during the past several years. The park is always busy and has become the site of many community activities, including Irmo’s popular Okra Strut festival.

Condom said a lot of things happened during her tenure she didn’t expect. The opposition would emerge frequently on different’ issues, but over the years she learned to deal with it and move on.
She looks back on her service with satisfaction.

Colleagues describe Condom as the level-headed council member who had a good understanding of issues affecting the residents of Irmo. She always had a calm demeanor during council meetings, even when major disagreements would surface.

Jake Moore, long-time attorney with the town, said he would describe Condom as “gentle” and “kind.”

Mayor Barry Walker Sr. said the word that comes to mind when he considers her long tenure is a demonstration of “respect” for fellow council members and for the community.

Condom said she was moved by the complementary public comments made during the celebration by Walker and Rep. Chip Huggins, R-Lexington.

Condom was joined at the celebration by her two daughters, their husbands and her grandchildren.

The council has put on the agenda at the Nov. 16 council meeting a resolution recognizing Condom for her 18 years of service by designating Nov. 16 as “Kathy Condom Day”.

The resolution states that Condom has served with “commitment and distinction” since she was elected in 2003 and “has been a strong advocate for the citizens and the staff of the town.”

“The Irmo Town Council wishes to commend Kathy Condom for her outstanding efforts and leadership in keeping Irmo strong.”