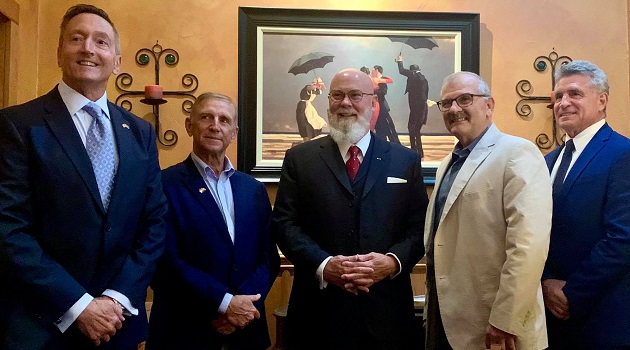 “These four epitomize what it means to be an IRONMAN,” says Mullikin, a former U.S. Army officer and retired two-star commander of the S.C. State Guard who today chairs the gubernatorially established S.C. Floodwater Commission. “All four men are accomplished martial arts tournament fighters, leaders in both the S.C. Black Belt Hall of Fame and in the broader communities in which they have worked and live, and all have contributed tremendously to the work of Global Eco Adventures.”

Mullikin adds: “These men have regularly promoted GEA events and projects, served as unofficial ambassadors of GEA, and one – Col. Steve Vitali – continues to officially serve as operations officer of the National Security Task Force of the S.C. Floodwater Commission. Beyond that, they each reflect a strong sense of intellectual acumen, physical prowess, and the kind of spiritual commitment which describe an IRONMAN.”

The four IRONMAN recipients were accompanied by their wives: Kathy (Keith), Rhonda (Steve), Jeanne (Bruce), and Shelley (Mike). Also in attendance was 93-year-old Joseph Vitali, father of Keith and Steve.

According to a portion of the Aug. 26 group citation: “Keith is a world-renowned Karate fighter and recent inductee into the World Martial Arts Grand Masters Hall of Fame. Steve is a retired colonel of Marines and decorated veteran commander of combat forces in Iraq and Afghanistan. Bruce is a local hero who single-handedly apprehended a dangerous felon in 2004 earning a reputation for heroism and selflessness at the risk to his own life. Mike is a near-legendary martial artist and Karate instructor whose very name in central South Carolina is not only recognizable but synonymous with supremacy in fighting skills, fight mentoring and martial arts training.”

GEA is a non-profit adventure-education organization that directs large environmental projects and outfits and leads exploratory expeditions and to some of the most isolated regions around the world.