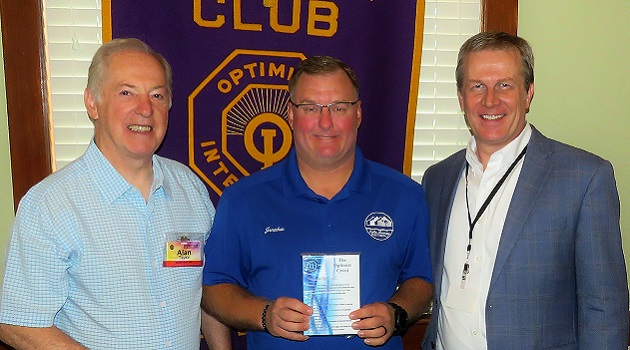 The Optimist Club of St. Andrews-Irmo is at its heart a service club that strives to do as much good as it can in the community with the focus on benefitting young people.

The Club meets almost every Friday and most times, hears from guest speakers on a variety of topics. While there is always stimulating information that flows from the speakers, rarely if ever is there emotion. Almost as infrequent are spontaneous standing ovations.

The speaker June 3 was Jonathan Clarke, who humbly, but forcefully, led the assembled group through what life is often like for returning combat veterans. Clarke, now owner of Lake Murray Event Rentals, served more than 20 years in the military and did three tours in Iraq. He recounted how corrosive the experience was when rounds were whizzing all around him, with no clue where they were coming from, when they would stop, or who would be struck by one. IEDs could explode almost anywhere with no warning. It was an IED explosion that struck Clarke’s vehicle giving him a head injury which to this day he must try to manage.

Upon returning from his last tour, he found himself becoming sedentary and unmotivated. He said this condition would probably have continued indefinitely, were it not for a friend who coaxed him into doing odd jobs around Lake Murray Event Rentals. Clarke progressed gradually from total inactivity to finding a mission and purpose, and finally to purchasing the company. It was this life story of restoration that caused him to see the need for Mission 22.

The catalyst for that organization, which is national in scope, was the sad fact that every day an average of 22 military veterans take their own lives. Clarke knew through his own history how powerful restoring a person’s life purpose can be. He is now dedicated to applying that knowledge whenever and wherever he can and plans to be one of Mission 22’s ambassadors in the Midlands.